'The Dead And The Others': Cannes Review

A Brazilian teen attemps to escape his spiritual fate 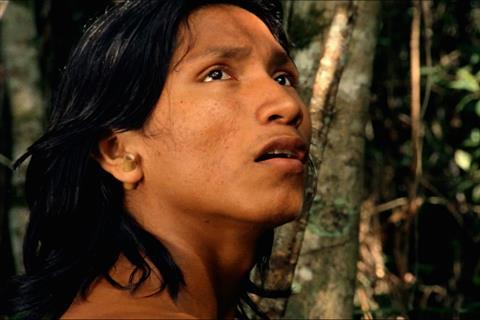 The Dead And The Others

The life of one Krahô teenager reflects the wider challenges for an entire indigenous population in The Dead And The Others (Chuva é Cantoria na Aldeia dos Mortos). This meditative drama from João Salaviza and Renée Nader Messora captures the tension between honouring ancient traditions and the inescapable encroachment of the modern world. A modest, sensitively handled tale that unfolds at a decidedly measured pace, it seems likely bound for a festival life rather than a commercial future.

This fictional film is drawn from life and the experiences of filmmakers who spent nine months with the Krahô people in Pedra Branca, a village in northern Brazil. The immersive sound design by Pablo Lamar pitches us into a wall of noise in a jungle where every sound, from a roaring waterfall to a screeching macaw, is heightened.

It feels remote and peaceful but far from tranquil as we come to know Ihjãc, a 15-year-old Krahô. He already has adult responsibilities of a wife and a child and the need to provide for them. He is also troubled by the fact that his late father is urging him to hold a funerary feast that will make the end of official mourning. His father’s spirit can then to depart for the village of the dead.

The mere fact that Ihjãc can communicate with his dead father is sign that he is beginning to acquire the gifts of a shaman. It is a fate he wishes to avoid. In the second half he flees to the city and a Support Hostel for the indigenous population. The soundscape is very different here with its mixture of traffic, human babble and urban life. Ihjãc’s world is now four concrete walls, a humble bed and nothing to do. The medical team are unsympathetic to his claims of illness and fears that he will die if returned to Pedra Branca. There is neither compassion nor understanding in the way he is treated. Ihjãc does not belong to the city and is also at odds with what might await him in his village, stranding him in a no man’s land.

The film takes a documentary-like approach to the depiction of both urban and rural life. Static camerawork invites the viewer to acclimatise to the slower pace of the village and there are some attractive images of mauve sunsets, waterfalls and happy scenes of family life. There are signs of the tension between ancient and modern — Ihjãc’s wife may work in the fields with a machete but she paints her nails with ‘Hot Kiss’ polish.T here are the vaguest hints of what the Krahô people have endured with mention of a massacre at the hands of farmers and images of ruined buildings that were once a government outpost. Ihjãc and his tribe are facing a time in which their future existence is in some doubt.

The Dead And Others is very determined not to spell anything out. It is unassuming and respectful but there is a price for that. Patient viewers have to work hard to engage with the film and sustain their interest as the steady pace continues, and the running time closes in on two hours.