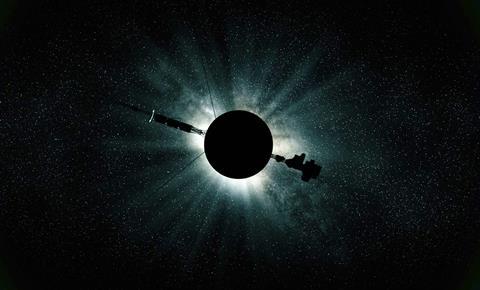 By rights, Emer Reynolds’ documentary The Farthest shouldn’t be the soothing, deeply moving film that it is. Revisiting the 1977 launch of the Voyager space probes through the testimony of the NASA team involved, it wrestles with the vast and the incalculable and the terrifying to remind us of our own shattering insignificance. Yet in Reynolds’ sympathetic hands, this becomes a reassuring message in troubled times for the human race, and one that should connect powerfully with global audiences if given the opportunity.

It’s the right film at the right time, a cathartic moment in which audiences will shed tears for a little machine made of silicon and aluminium

World premiering at the Dublin Film Festival, where it won the Audience Award, this intelligent, thoughtful Irish Film Board-backed doc should easily find further festival play and special screenings and it is a natural prospect for family viewing. The Farthest is long, for a doc, at 121 minutes, and will play best on the big screen; two hurdles which still won’t prevent it from appearing on best-of lists and lining up for 2017 awards play. It’s the right film at the right time, a cathartic moment in which audiences will shed tears for a little machine made of silicon and aluminium, wrapped in tin foil and running on less computing power than our smartphones, yet which will outlive us all – perhaps by billions of years.

Disseminating complicated technical information through the talking-heads of the ageing, greying Voyager team, The Farthest operates a switch-and-bait tactic throughout its admittedly stretched running time. Reynolds moves from delightful first-person reminiscences to the breath-taking imagery from Voyager’s feeds, complimented by, whenever the pace lags, an anecdote from the production of Carl Sagan’s “golden record” – a disc carried by Voyager which contains 100 images of Earth, greetings in multiple languages, and 27 pieces of music which range from Bach to Chuck Berry.

So us, and space. And back again.  Reynolds shows us the sheer scale – of the Voyager team’s achievement, of Voyager itself, of ourselves, of what we can do and what’s out there. The Farthest is also a smooth technical operator, with Kate Mccullough’s limpid, Earth-bound imagery contrasting with Voyager’s odyssey and period footage from the 1970s and 80s (Reynolds places Voyager’s journey in the context of the Nixon era and, later, the ill-fated Challenger expedition). Apropos music from The Carpenters etc (Calling Occupants of Interplanetary Craft) and a gliding score by Ray Harman help ease the viewer through the technical challenges.

Soon, the scientists tell us, Voyager’s lithium batteries will die, and all that will remain is the golden record message it carries as it burrows on into deep space, maybe forever. This spacecraft could eventually become all that’s left of the human race. Reynolds’ alignment of the planets is somehow restful, however; a voice to remind us of what we could and still can do, and of our proper place in the firmament.

In this, she is assisted memorably by the scientists themselves, these ferociously smart men and women who set Voyager off on its Homeric mission and now look back in fondness, awe, pride, and a not insignificant amount of love. Like proud parents, they are still moved to tears by the craft itself, still excited by its achievements.

Reynolds, of course, is not the first to try to harness the galaxy on screen, to capture and convey the astronomical scale of the empty space, to try make sense of all those billions of years. (“People ask why,” says one commentator, “when what they really mean is how.”)

In the Voyager project, she has found a unique story in which to mount her own exploration. Voyager 1 has exited the Heliosphere, and its makers love and miss this humble craft. Reynolds’ achievement is that, by the end of The Farthest, viewers will both understand why, and feel exactly the same way.