The Jim Henson Company mixes it up with Melissa McCarthy. 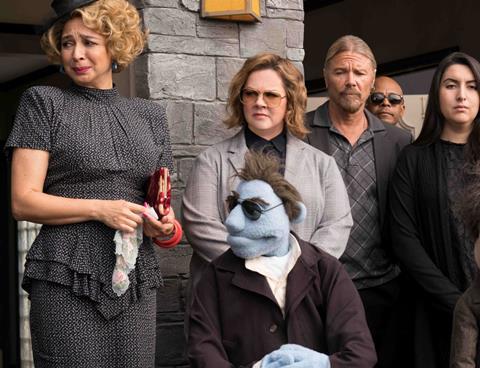 The sight of Melissa McCarthy mixing it up with foul-mouthed puppets is instantly amusing — but that fades quickly in The Happytime Murders, a film with a very clever premise which its makers mistakenly assume will be enough to support a 90-minute runtime. Set in a world where puppets and humans work and live side by side, this R-rated comedy from The Jim Henson Company’s adult-themed division Henson Alternative never really capitalises on the gleeful sacrilege of portraying seemingly lovable felt characters who swear, shoot, screw and do drugs. Happytime thinks it’s being subversive, but it’s mostly just strained.

Opening August 24 in the States and three days later in the UK, Happytime will benefit from McCarthy’s star power, not to mention supporting turns from Elizabeth Banks and Maya Rudolph. But this STX release will have to hope that grownups will thrill at the prospect of watching Jim Henson’s son Brian, who directed and produced Happytime, deliver a ribald adult entertainment far removed from the innocence of Sesame Street.

The film takes place in Los Angeles as we meet Phil (voiced by Bill Barretta), a cynical private investigator. Humans treat puppets like him like second-class citizens, but he soon has bigger worries once the cast members of a hit 1990s children’s show called The Happytime Gang start getting murdered one by one. Reluctantly, he teams up with his old cop partner, a human named Edwards (McCarthy), to figure out who’s behind these killings.

The juxtaposition of the audience’s childhood memories of kind-hearted puppets and Happytime’s impertinent shredding of that chaste veneer can be funny. But more often, Henson lets that shock lose its potency by endlessly repeating the same comic premise. Once it has been established that Phil and his fellow puppets behave like us, there’s not much surprise or development of the joke — just the tiresome insistence that the joke is infinitely hilarious.

Happytime’s depiction of puppet discrimination vaguely references contemporary bigotry and xenophobia, but the commentary is merely skin-deep. (Or, because they’re puppets, felt-deep.) Henson’s team does good work bringing the puppets to life, and the use of green-screen suits allows Phil to be shown from head to toe, solidifying the illusion that he’s alive. McCarthy proves to be a game co-star, interacting with the puppets with such sincerity and rapport that always feels believable.

But while the technical aspects are faultless, Happytime’s mystery isn’t very arresting. It’s rather easy to guess exactly who’s behind these killings, although some of Phil’s tongue-in-cheek “tortured” backstory niftily pays homage to the clichés rampant in buddy-cop movies. On the whole, the film feels like a loose collection of intermittent raucous moments without much to tie them together.

Among McCarthy’s human cohorts, Rudolph has fun leaning into the one-dimensionality of her role as Phil’s loyal, slightly ditzy secretary. Playing the one non-puppet from The Happytime Gang, Banks knowingly winks to the audience, portraying this washed-up actress like a noir-ish fading beauty. (She and Phil have a romantic past, which gives the movie the faintest flicker of emotional resonance.) But while the actors and puppeteers are committed to The Happytime Murders’ surreal reality, they almost do too good a job: This world’s authenticity is so complete that you’re left mostly slogging through how inanimate most everything else about the movie is.