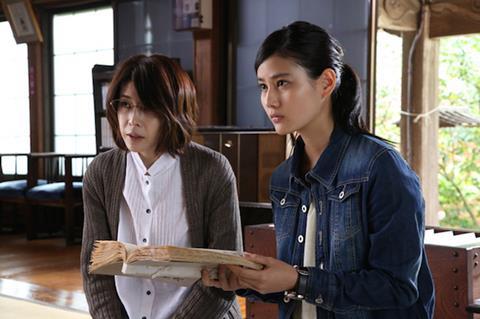 Have you ever reflected on the history of the plot you live on, those few square metres that may have hosted other dwellings over the centuries, grander perhaps, maybe more modest, where long-dead people once lived, loved, raised families, livestock and crops, or, more pertinently in the present case, hung themselves and killed their babies? If not, now’s your chance, as prolific Japanese director Nakamura’s new horror yarn, which premiered in competition at the Tokyo International Film Festival, is about just this subject: the creepy backstory of urban lots.

This is a meta-horror film, one that builds a knowingness about the genre’s tropes and tricks into the fabric of the story.

It’s an intriguing premise, and for some of the running time of what is a professionally shot and edited package, it holds our attention. But there’s something else going on in a film that uses the narratorial figure of a Japanese writer of horror and suspense stories to deconstruct the way scary neighbourhood tales arise, evolve, and follow certain set patterns.

For this is a meta-horror film, one that builds a knowingness about the genre’s tropes and tricks into the fabric of the story. At the same time, The Inerasable would quite like to make us jump in our seats. Like a magician who explains the sleight of hand behind a trick as he performs it, this makes for a curious and slightly alienating experience, and one that is not going to appeal to those who like their J-Horror served straight, no chaser.

In Japan, where Nakamura is something of a brand name and female co-stars Yuko Takeuchi and Ai Hashimoto are familiar faces, it should find a responsive audience; elsewhere this is strictly one for the Asian genre completists.

There’s no denying that The Inerasable comes up with a couple of interesting ideas. One is to set a haunting in a modern residential block, built in the early nineties; the other is to make the hauntee, Ms Kubo (Hashimoto), not a ditzy victim but a solid, sensible girl with a taste for the paranormal. An architecture student, she’s also head of the university Mystery Club, and when she hears an intermittent sweeping sound coming from the bedroom of the small apartment she rents in Kodaira City, she’s torn between alarm and the curiosity of an avid consumer of ghost stories. It’s the latter penchant that prompts her to write to Yoshiami Hoshida (Takeuchi), a novelist who bases many of her books on accounts of supernatural phenomena sent in by readers.

Soon enough Yoshiami, whose voice-over narration lends the film an easy, conversational tone, has arrived in the Tokyo satellite town, intrigued by Kubo’s amateur investigations, which at first focus on the former tenant of the student’s apartment – a lonely geek who moved out earlier than planned and ended up killing himself. The two women interview neighbours – named documentary-style in on-screen captions – estate agents and local historians, gradually peeling back waves of occupancy and unveiling more than one tragedy and episode of violence, but also sketching in some of the social transformations of a city lot that was once, back when this was a mining town, the mansion of a coal baron.

The film’s restagings of past frights and horrors have a grainy look, to distinguish them from the present-day sleuthing, which becomes increasingly heavy on exposition, invoking the aid of old maps sourced from planning departments and libraries. Scenes involving Yoshiami’s mild-mannered, supportive husband – also a writer – and her experienced literary editor take little parodic digs at J-Horror tropes – like the one about the story that has the power to kill those who listen to it.

But at the same time, we feel the director desperately wants to put the frighteners on his audience, even as his characters discuss the mechanisms that generate the paranormal visions we use to scare ourselves with. There’s much play on the Japanese term ‘kegare’, which translates as ‘dirty, impure, unclean’, the suggestion being that certain places never wash away the stains of the bad acts that have been perpetrated there; it’s a concept that takes CGI shape in the crawling smoke figures that crawl out of the shadows in in a couple of the historical flashback scenes.

But these coal-mine spooks are about as disturbing as Miyazaki’s cuddly dust sprites, in a film that comes on as a strange mash-up of classic J-Horror fright-fest, smart meta-cinematic parody and Nancy Drew investigation: a curious blend, but not exactly a compelling one.

Screenplay: Kenichi Suzuki, based on the novel by Fuyumi Ono