'The Land Of The Enlightened': Sundance Review 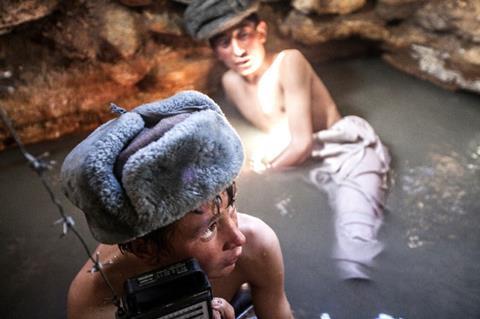 In The Land of the Enlightened, armed bands of children in the high plains of northeastern Afghanistan survive on scavenging and stealing. Hypnotic, playful and chillingly austere, the hybrid documentary blends romance and raw realism.

De Pue’s logistical triumph in caves and on caravans aims for visual magic, and captures plenty of it.

Afghanistan is as majestic as it is dangerous in Pieter-Jan De Pue’s feature length debut, a 16mm evocation of constant war in those vast empty spaces. Yet films about Central Asian conflict – even with smiling, enterprising kids — have been a hard sell in recent years. De Pue also faces competition from Snow Monkey, George Gittoes’s tragi-comic 2015 documentary about war-damaged child gangs in Jalalabad who are recruited for low-budget films.

After what should be a solid festival run and some exposure in art houses, The Land of the Enlightened is likely to be seen on television – an inadequate format for its aesthetic ambitions. Given the charm of the children, and their dark mix of innocence and cold-bloodedness, this could even have potential for a feature remake.

On a high desolate plateau, a teenaged gang  (seen mostly in re-enactments) inhabits an abandoned Russian outpost from an earlier lost war, descending on horseback when caravans appear on the vast plain below. More opportunistic than enlightened, the boy bandits shake down traders for opium, arms and anything else they have. This bandis dressed in new uniforms (bartered or stolen) and feeds on sheep culled from grazing herds. In a memorable scene, the boys feast on a ram’s head and brains, and drink sheep’s milk from an old battle helmet.

In a parallel strand of De Pue’s travelogue, US soldiers occupy a perch overlooking a green valley with a taciturn population. The troops shell sites where the enemy might be, echoing the isolated US unit in Restrepo, the 2010 documentary by Tim Hetherington and Sebastian Junger. Immature, rowdy and wildly profane, these Americans are far less suited to the rugged surroundings and seem a graceless reflection of the younger Afghan boys. As a GI’s mournful classical guitar sets the tone, the scenes there make you wonder why anyone thought Americans could ever tame this country.

Mountains that dominate the landscape are desperately stark and staggeringly picturesque, as observed by De Pue, also DP. Caravans spied from afar in barren valleys seem motionless in a still frame, like scenes from Chinese landscape paintings from centuries ago. In dust-filled caves that are now improvised mines for blue lapus lazuli, children and donkeys sag under huge bags of stone and spent shells. You feel as if the clock has been set back a thousand years.

And there are moments – albeit moments – when Afghanistan seems more than stones and struggle. Fields of poppies – green and dark pink at point-blank range – are soothingly hallucinatory in intimate 16 mm. Like everything else, they are tended by children – in this case, little girls who barely stand as high as the poppy stalks.

De Pue’s dramatic re-enactments of kids galloping to rob caravans and swarming to steal from abandoned tanks on a green pasture are the stuff of children’s fantasy adventure books – yet the ammunition, which children use as currency in these parts, is real.

With the exception of the over-supplied and tech-ready US soldiers (who seem unbothered by the embed camera), adventure elbows out ethnography in The Land of the Enlightened. Relying on re-enactments, De Pue has ginned up the drama. Yet his logistical triumph in caves and on caravans aims for visual magic, and captures plenty of it.