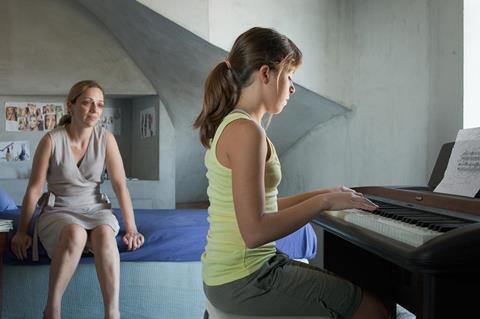 A thoughtful, if rather straightforward, family drama that it at its core reflects the current economic crisis in Greece, writer/director Athanasios Karanikolas’ At Home (Sto Spiti) is an attractively made film given heart-and-soul by a wonderful lead performance by Maria Kallimani as a faithful family employee who becomes dispensable when circumstances change.

The whole film is handled in admirably restrained fashion, with cinematographer Johannes M. Louis shooting elegantly to make the most of the strong locations.

The film, which won the Prize of the Ecumenical Jury at Berlin, has the capacity to feature on the festival circuit, and while never groundbreaking it is made with a sense of compassion that marks it out.

Fortysomething Georgian immigrant Nadja (Kallimani) has worked for a wealthy family at their grand house in the hills of Marathon in Greece for many years and has long been an important part of their life. She cleans, cooks and drives the family’s 12 year-old daughter Iris (Zoi Asimaki) to her piano and riding lessons.

The father Stephanos (Alexandros Logothetis), is some kind of high-powered executive, while the mother Evi (Marisha Triantafyllidou) is a writer. It is a busy but stable situation for Nadja – whose grown-up daughter Katerina (Nefeli Kouri) is at university in Germany – but things all change when she gets ill and is diagnosed with a degenerative disease much like multiple sclerosis.

All this coincides with the fact that Stephanos’ company is suffering due to Greece’s economic crisis and decides the family simply cannot afford to look after their loyal servant. The family offers her a pay-off, but the stoical and proud Nadja declines, and left with no insurance or health-care moves in with her sometime boyfriend Marcos (Giannis Tsortekis), the stable-hand who looks after Iris’ horse Spartakus.

While the story hints at lush melodrama, in fact the film is handled with a dry lack of real emotion and thin on moving dialogue; the characters simply go about what they need to do in the best way they can. Maria Kallimani’s Nadja is oddly noble, almost accepting of her fate and hiding her sadness as she gets on with her life.

The whole film is handled in admirably restrained fashion, with cinematographer Johannes M. Louis shooting elegantly to make the most of the strong locations, and while the subtext is about the gap between rich and poor and how the situation in Greece is impacting on everyone the main story is familiar and subtly judged.