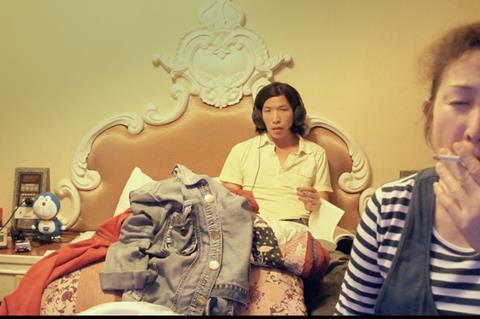 ‘The Moon Represents My Heart’

Argentine-born and of Taiwanese extraction, director Juan Martin Hsu turns his lens onto his own family history in this intimate blend of documentary and drama. In 2012, after a 10-year separation, Hsu and his brother Marcelo are reunited with their mother, who has returned from Argentina to Taiwan. The brothers visit her again in 2019. For Hsu, the journey is an opportunity to explore an unresolved trauma from his childhood: the murder of his father. But while the dead man’s memory remains elusive, the brothers’ mother, a defiant survivor, crystallises into the film’s spirited and unpredictable subject. Fictionalised vignettes take themes of rootlessness and displacement and run with them, but lack the immediacy and intimacy of Hsu’s family footage.

Hsu’s mother is an intriguing character and, one suspects, a not-entirely-reliable narrator of the family’s history

The Moon Represents My Heart is the second feature-length film from Hsu, following a debut, the fiction feature La Salada, which won several prizes, including the Best First Film Award of the Argentinean Academy. The blend of personal history and fictional elements bears some similarities to Jorge Thielen Armand’s La Soledad, but rather than functioning as an integral part of the film, the fictional elements here can feel a little superfluous and tacked-on. Still, the film’s idiosyncratic approach and indomitable matriarch should recommend it to further documentary festivals and programs, particularly those which explore the more experimental fringes of factual filmmaking.

Given to dropping bombshell revelations into the conversation and gifted with an innate sense of dramatic timing, Hsu’s mother is an intriguing character and, one suspects, a not-entirely-reliable narrator of the family’s history. A seemingly innocuous flick through an album of family photos leads to the film’s first curveball. Many of the pictures have been edited: Hsu’s mother vented her displeasure with people who annoyed her onto the family snapshots, scissoring off the faces of those who crossed her — including, it turns out, Hsu’s late father. His crime — he had another woman. And apparently, it was her fault that he died. Hsu’s mother’s tone is matter of fact when she confides that the other woman paid to have her husband assassinated. Hsu’s silence behind the camera suggests that he has heard this story before, and that his hope of learning more about his father’s death might not be realised.

Family karaoke sessions — the film’s title comes from a popular Chinese ballad — and moments of quiet intimacy in front of the television are cut together with further revelations from Hsu’s mother. She suggests that the rumour of Triad involvement in her husband’s death might not be unfounded, hinting that he may have been a drug user. The family history is further explored with a discussion about Hsu’s grandfather’s treatment during Taiwan’s ‘White Terror’. “Not a bit of his body was in one piece when he came out,” comments his mother on her father’s incarceration by the Kuomintang authorities.

Hsu’s silence takes on an added weight when it becomes clear that, as a young child, he discovered his father’s body. It’s unclear how much, if anything, that Hsu remembers of this — the lack of discussion on the matter feels like a curious omission. However, the decision to focus predominantly on Hsu’s mother’s voice is ultimately one which rewards on several levels. Her brusque manner belies a natural gift as a raconteur. But more potent than this are the moments of quiet connection between mother and son, her shy smile as she seeks out his camera from the far side of the room.