Leonel Dietsche makes his debut with a dystopian thriller 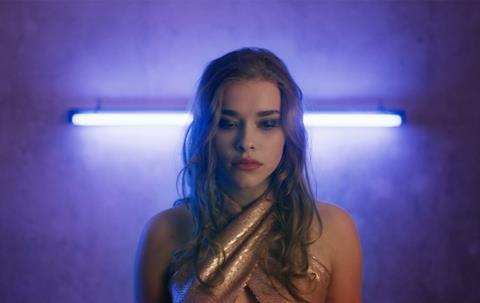 Dystopian fantasy with a feminist angle sounds like an enticing prospect but The New End (Der Neue Ende) fails to make the most of its material. Leonel Dietsche’s overly ambitious debut feature struggles to fully develop a story that feels clumsy and incoherent, while also being so painfully earnest as to invite disbelief. There doesn’t appear to be a great future for The New End, dystopian or otherwise.

Gyrating boys and blood-smeared torture adds a lurid, voyeuristic element that pushes the film towards the grubbier end of B-movie exploitation cinema

The film’s post-apocalyptic landscapes are depicted in familiar shades of grey as we enter a world of derelict buildings, desolation and blackened forests. We are told that seasons no longer change and disease has caused misery and death for the bulk of the population. The few male survivors are ruled by a militia under the iron grip of Warlord (Marko Mandic), a man whose ferocity seem to consist of swilling alcohol from a bottle and indulging in some horseplay with his men. Warlord’s ally is Doctor (Sylvester Groth) who resides in a former sanatorium where a collection of boys provide the pleasure he once sought with women.

We learn all of this in extensive voice-over from Dwarf (Mick Morris Mehnert ) who seems to exist solely to recount a plot that the filmmakers cannot find more imaginative ways of relating. Dwarf observes everything that happens, including the arrival of the mystical Healer (Georg Friedrich) and the fact that there is an island nearby where Mother (Sabine Timoteo) desperately tries to protect the innocence of her adolescent Daughter (Milena Tschantke).

The New End is the kind of film where you can see what the director is aiming for but soon discover he hasn’t found a clear or convincing way of achieving it. Dietsche seems to be seeking a mixture of The Road and Mad Max with a vague sideways nod in the direction of The Handmaiden’s Tale, but none of the elements gel or manage to engage our interest. The plight of Daughter has potential as a point of dramatic conflict, but is adopted and abandoned without much impact. The threat from Healer to the dominance of Warlord is established and then neglected. The gyrating boys and blood-smeared torture in the house of Doctor adds a lurid, voyeuristic element that pushes the film towards the grubbier end of B-movie exploitation cinema.

The performances often seem either tentative or excessive with nobody really given the chance to impose themselves on an awkwardly written screenplay. George Friedrich’s raspy-voiced, unblinking Healer has the most potential but tends to disappear from view just when he could have started to dominate.

The polished cinematography of Robert Stuprich does impress as it effectively captures the mood of oppressive gloom and the atmosphere in some of the few exterior locations, including a rusted, abandoned swimming pool. Mostly, The New End is a film that struggles to match its ambitions. Excluding the credits, the running time is scarcely over an hour which may also help explain why it feels sketchy and garbled.