‘The Other Widow’: Tallinn Review 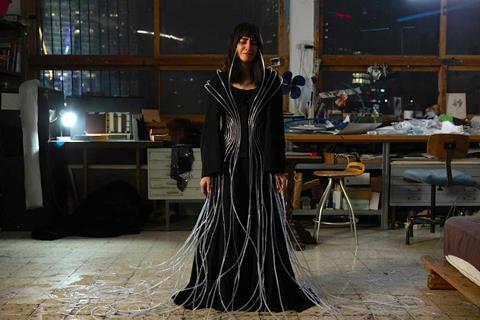 For theatre costume designer Ella (Dana Ivgy), the sudden death of her lover and collaborator, theatre director Assaf, is doubly devastating. She is consumed by grief, but, as Assaf’s mistress, her pain should be as secretive as the stolen moments of their affair. But as Assaf’s icily beautiful wife Natasha (Ania Bukstein) sits Shiva (the traditional seven days of Jewish mourning) at her elegant home, Ella finds herself drawn back each day; fascinated by glimpses of aspects of her lover and his life which were hitherto closed off from her. This impressive debut from Ma’ayan Rypp is an elegant and empathetic portrait of that most vilified of female characters, ‘the other woman’, combining satisfyingly textured character details with a suitably theatrical flourish to arresting effect.

An elegant and empathetic portrait of that most vilified of female characters, ‘the other woman’.

The film, which was developed in the Cannes residency, follows several well-received shorts from Rypp, including Al Martha Lauf, which was selected for the Cannes Cinéfondation in 2011. The director has also cut her teeth working in the art department of several productions, experience which is evident in the eloquent design of this picture. Following its premiere in the First Feature competition in Tallinn Black Nights, The Other Widow should be warmly received on the festival circuit and could find a home with a boutique arthouse distributor or curated streaming platform.

A terrific opening scene gives an indication of the sharp writing throughout the screenplay. At home in her bohemian, cluttered apartment, Ella is surprised by a delivery of Thai food that Assaf has ordered without her knowledge. Happily anticipating his arrival, she sets the table. But then the delivery driver returns and reclaims the food. It was the right name, he explains, but the wrong address. It’s a potent moment that drives home Ella’s precarious status. Everything about her relationship with Assaf – even a takeaway food order – is borrowed, and can be unceremoniously stripped from her without warning. Rypp loops back to this scene later on, for a pivotal revealing moment.

There is a stark difference in status between Ella, stricken and shabby, hovering at the edge of the shiva while her colleagues whisper that her presence is “inappropriate”, and Natasha, cool and queenly in her autocratic mourning. Ella is torn between guarding her secret – it’s the only thing she has left of Assaf – and blurting out her truth and staking a claim on her rightful share of the sorrow and sympathy. The more she learns about her lover, the more Ella is forced to question her own status. Assaf’s brother scoffs that nobody mentions all the other women in his brother’s life. And Natasha’s eyes sharpen like knives when Ella oversteps by betraying a suspicious familiarity with the kitchen setup.

Her body betrays the pain that she tries to conceal – encounters with Natasha are punctuated with nosebleeds, and a white streak appears in her long black hair. And when, in a strikingly surreal moment, the private tears come, they are captured by a system of tubes attached to an avant-garde dress that she has designed for a production of Medea (which provides a neat thematic parallel). The grief is so consuming that Ella’s tears flood the floor of her kitchen.Smart use of sound – the shiva is fortified by a wall of voices that excludes Ella – also emphasises just how isolated she is.