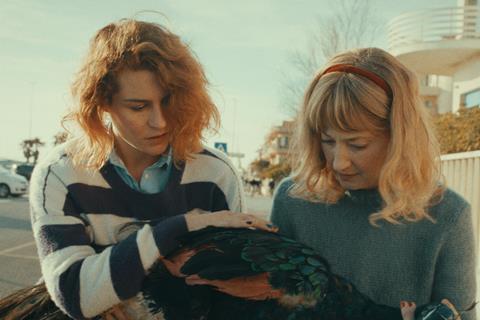 Family celebrations never seem to go well in European indie dramas. That’s certainly the case in Italian director Laura Bispuri’s third feature, which stars French veteran Dominique Sanda as a matriarch whose birthday gathering releases a series of long-buried tensions and secrets. So far, so familiar. Where this Italian-German co-production becomes positively weird is in its deployment of a live peacock to brings the drama, and the characters, to some kind of catharsis.

A small, spiky chamber piece with rather too many unmemorable characters.

It’s an audacious move – one audiences are likely to associate more with the Theatre of the Absurd or a magical realist strand of animation than the intense, downbeat drama genre The Peacock’s Paradise otherwise conforms to. But it also turns out to be a misguided one, as it’s the very solemnity of its treatment which, in the end, makes the exercise feel more than a little ridiculous. What’s left when you subtract a bird that positively squawks with symbolic weight is a small, spiky chamber piece with rather too many unmemorable characters.

The Peacock’s Paradise has a few telling things to say about freedom within families and relationships, and how this can sometimes be achieved by accepting and embracing those who don’t always behave in ways that we imagine would make us happy, or emotionally fulfilled. But Bispuri’s third film is nevertheless a minor work that feels like an intermezzo after two strong women’s dramas, Sworn Virgin and Daughter Of Mine, both of which debuted in competition at the Berlinale,  and drew energy and friction from their wild rural settings.

Here, we’re penned for most of the film’s duration in a claustrophobic middle-class apartment on the coast south of Rome. It belongs to strong yet restless Nena (Dominique Sanda) and her mild-mannered husband Umberto (Carlo Cerciello). Their insecure middle-aged son Vito (Leonardo Lidi) and conflicted daughter Caterina (Maya Sansa) are driving here to celebrate Nena’s birthday. Both have some baggage in tow: Vito is accompanied by his neurotic girlfriend Adelina (played by the director’s go-to actress, Alba Rohrwacher), Alma, the couple’s cute little girl (Carolina Michelangeli) and pet peacock Paco, while Caterina’s shallow, manipulative ex-husband Manfredi (Fabrizio Ferracane) invades the party uninvited, leaving his new flame Joana (Tihana Lazovic) stewing in the car outside.

All come bearing gifts and secrets: Vito and Adelina – a recovering invalid whose docile, girlish exterior conceals a near suicidal desperation – have decided to get married, though they need a loan from Caterina to do so. Caterina, meanwhile, hasn’t yet told her family that she and Manfredi are separated. As for Nena, she has a forty-year-old secret that involves live-in housekeeper Lucia (Maddalena Crippa), whose troubled daughter Grazia (Ludovica Alvazzi dal Frate) never utters a word. That melodramatic touch is all of a piece with a drama that veers between quietly affecting scenes that have a prickly truth to them and others that feel heavy handed and theatrical.

There’s no faulting the commitment of a cast guided by Sanda’s unshowy but authoritative performance as a woman at peace with the messiness of life. And the intimate, shallow-focus handheld photography of talented Sarajevo-born Italian DoP Vladan Radovic, who worked on both of the director’s previous films, does a lot to keep the drama grounded. But even Radovic can only do so much with a symbolic peacock that tries to fly, but (having been housebound all its life), can only plummet. There are too many scenes in The Peacock’s Paradise in which characters stand around like band members on a 1990s album cover, looking troubled and serious in a wintry setting as small dramas are played out in front of them – and unfortunately, audiences could find that dourness infectious.