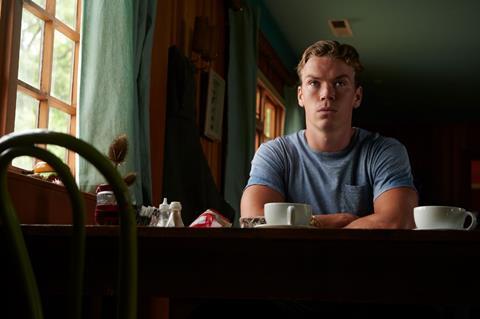 A heist movie, driven not by nerve-shredding tension and incremental peril, but by outbreaks of noodling folk rock: the first feature from writer and director Malachi Smyth is a genuine original. But the picture, which stars Will Poulter and Johnny Flynn as a pair of small-time criminals holed up in a roadside cafe, and which includes, as its musical component, compositions by Flynn, is perhaps more unusual than it is successful.

Flynn’s involvement, both as an actor and musically, will be a selling point – this singular project will likely connect most effectively with audiences who are already committed fans of his distinctive style. Certainly, his vocal approach, an enervated growl which speaks of a bone deep weariness and disillusionment, compliments the poetically obscure lyrics of his compositions. Co-stars Will Poulter and Naomi Ackie both have perfectly decent singing voices but seem less comfortable with the material. Further prospects might be hindered by the fact that the film defies easy categorisation – too languid and baggy to work as a crime thriller; too offbeat to tick the conventional musical boxes. This idiosyncratic approach could recommend The Score to further film festivals, but it may prove to be a marketing challenge for prospective distributors.

An opening musical number, performed by all of the key cast members and shown through a split screen device, sets the scene. Troy (Poulter) locates a bag of cash which was hidden by his now-incarcerated older brother. Mike (Flynn), currently living in the world’s grimmest caravan with his family, hands over a gun to his wife. And Gloria (Ackie) potters around her place of work.

The dynamic between the two men is fractious from the offset. Troy tends to babble when nervous – his gibbering monologue is as free-ranging as it is wearisome, taking in everything from the many multiple meanings of the word “score” to his own lacklustre academic record – while Mike has clearly reached the end of his tether mere minutes into their car journey together. Still, as the film progresses, our sympathy gravitates towards the hapless Troy rather than the deliberately cruel Mike.

But for all the somewhat arch dialogue – this is a film which skews towards talk rather than action – there is little sense that any of the characters has an identifiable voice. The stylised writing disengages the words from the people who speak them. Likewise the use of Flynn’s songs, none of which is tailored specifically to the character who performs it, or even to the plot point that it punctuates. Instead there’s a kind of harmony of tone and mood – an intriguing approach to the use of music, but one which consistently slows down the already leisurely storytelling.

Not that there’s a great deal of story to be told. Much of the picture unfolds in a single location; the unprepossessing little cafe where Mike and Troy wait to pull off an unspecified deal and Gloria works behind the counter, while “waiting for something better.” There’s a frisson between Troy and Gloria, forged over a fumbled coffee order and cemented through several duetted songs – one performed in an abandoned rowing boat, another while doing the washing up. The murky colour palette is flooded with saturated colour as the emotional charge between them deepens.