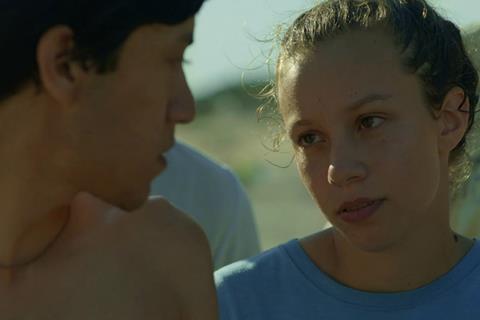 This confident debut feature from Uruguay’s Lucia Garibaldi is preoccupied with  threats that lurk beneath the surface. Not only the killer fish namechecked in the film’s title, which may or may not have taken up residence in the coastal waters near somnolent beachside town. But also the violence and disquiet which churns under the coolly impassive facade of 15-year-old Rosina (Romina Bentancur). The approach is small in scale and intimate – or as intimate as it can be with a protagonist who guards her thoughts and impulses so jealously – but Garibaldi crafts an atmospheric picture which provides a transgressive twist on the coming of age picture.

Garibaldi shies away from flat exposition, prefering to seed the film with intriguing clues and questions

The Sharks premieres in competition at Sundance having won the Films In Progress 34 Industry Award and the Film Factory Award at the San Sebastian Film Festival last year. Subsequently, Visit Films boarded the project at the Ventana Sur market in December. The film should attract interest from festival programmers looking for assured new voices, and since tonally the picture shares something of the inchoate unease of early Lucrecia Martel, a warm reception on the festival circuit seems likely. Arthouse theatrical interest is not out of the question.

Garibaldi shies away from flat exposition, prefering to seed the film with intriguing clues and questions about just what kind of a girl is Rosina. Her sister spends most of the picture sporting an eyepatch, the result of an unspecified incident for which Rosina is to blame. “It was an accident,” she says, flatly. “I know it was,” her father reassures her. But as the film unfolds, it becomes increasingly difficult for the audience to share his certainty.

But while there is a question mark over Rosina’s reliability as a witness, we know that she saw something in the sea during an afternoon swim. Was it a shark? That’s less certain, but when the mangled carcass of a sea lion is washed up on the beach, she volunteers a description, persuading at least some of the locals that creature she saw had a distinctive dorsal fin.

But while the community becomes fixated on hunting the creature, inscrutable Rosina’s attention turns to Joselo (Federico Morosini), her co-worker on her gardening summer job, working for her father. He’s interested in her too, in a desultory, distracted kind of way. But a clandestine meeting between the two is a let down for Rosina, who stares, impassive, as he vigorously addresses his own needs, instructing her to “Touch yourself.” Joselo soon cools, but Rosina remains fascinated with him, in a way which is not entirely healthy. Self-possessed throughout, she calculates the optimal methods to unsettle him, targeting his pregnant dog and his boat.

A synth score asserts itself, providing emphatic punctuation in this restrained, episodic story. And the photography is particularly strong, the shot composition emphasising the isolation and empty space around the action. It’s no wonder Rosina is restless – she is frequently stranded in vacant frames, with nothing to distract her from her conflicted fascination with this elusive, emotionally unavailable boy.