'The Sky Trembles And The Earth Is Afraid And The Two Eyes Are Not Brothers': Review 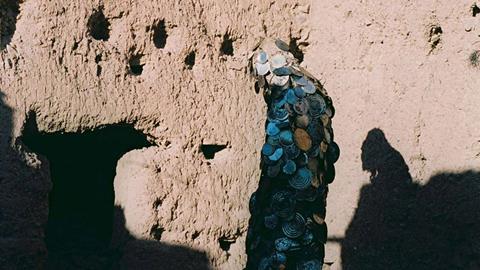 The Sky Trembles And The Earth Is Afraid And The Two Eyes Are Not Brothers grows into being recognisable as an adaptation of Paul Bowles’ intense 1947 short story A Distant Episode. To start, it’s a jangling mix of arresting images and sounds set in a tribal Morocco dominated by the Atlas mountain range.

If one was searching for the sensation of Bowles’ text – the ”orange blossoms, pepper, sun-baked excrement, burning olive oil, rotten fruit,” – it permeates here

Ben Rivers is an artist, an experimental film maker of acknowledged talent; this work forms the feature element of an installation first displayed at the BBC White City in the UK and now part of a museum collection at the Whitworth. And indeed, shot on hand-processed 16mm Cinemascope and transferred to 35mm for projection, this is pure art film at its undistilled essence. Rivers, who made his feature debut with 2011’s Two Years At Sea (followed by A Spell To Ward Off The Darkness), will not tolerate a relaxed appreciation of his images and insistent sounds, either: there’s a constant dissonance at play which makes this film’s undeniable beauty a distinctly unsettling experience with a hard, savage edge.

The Sky Trembles is hardly a commercial bet, but it’s nonetheless a fascinating, deeply elliptical artistic and geographical voyage until, at around the 55 minute mark, the film switches tack into narrative territory – or at least what passes for such in a Ben Rivers film.

Following a festival career which started in Locarno, The Sky Trembles AndThe Earth Is Afraid And The Two Eyes Are Not Brothers is niche film-making destined for festival sidebars, installation galleries and the furthest reaches of the raw arthouse where its subversion – which is sly and insistent – will be best appreciated.  It isn’t easy viewing. At best, the fact that it veers closer to narrative than much of Rivers’ previous work may help attract some new followers for this influential film-maker.

Rivers’ take on Bowles’ much-respected tale of cultural subversion ultimately acts as a visual accompaniment to the writer’s tale of the shifting cultural and colonial power.  (In fact, at the film’s outset, Spanish-French avant garde film-maker Oliver Laxe reads aloud some of the words which have inspired it. The title is derived from words Bowles overheard in a Tangier café.)

Laxe ‘stars’ in The Sky Trembles as a film-maker who is shooting a mysterious project amongst the native tribes of Morocco (the film will shift between that country’s Sahara and the forbidding ranges of the Atlas). A pre-title sequence in which the crew drives at twilight gives a taste of what will come: blindingly beautiful images, strained sound, no real sense of where we are or what’s to come.

Eventually Laxe abandons, or is lured into leaving, his set, and becomes the Bowles character – a linguist, or communicator, who loses his tongue and is forced to dance for his captors in a suit comprised of tin lids. Essentially the same story is told, with the same subtext, as the shifting sands of power move against the visiting European ethnographer. Local tribesman are deliberately and constantly shown in visually arresting tableaux but Rivers always underlines the staged and truthless nature of these images. “You’ve found what you’re looking for,” snarls one. Sound is frequently as captivating as image.

This never makes for easy viewing, but it’s still essential. There are caveats, however. Rivers can lose himself in the image, as demonstrated in the film’s last, indulgent sequence. It’s a very masculine piece, untroubled by a single female, although in the source material women shrieked at the captive professor’s vulgar performance. Yet still, if one was searching for the sensation of Bowles’ text – the ”orange blossoms, pepper, sun-baked excrement, burning olive oil, rotten fruit,” – it permeates here, in The Sky Trembles And The Earth is Afraid And The Two Eyes Are Not Brothers.