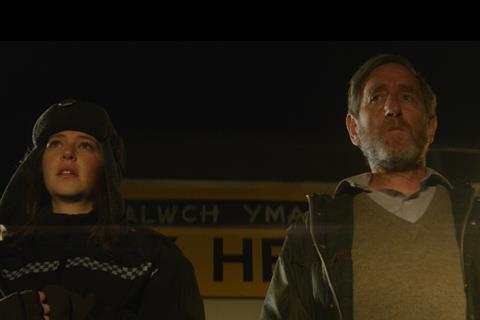 A youthful exuberance in the writing and a high tolerance for eccentricity makes for a certain gauche quality in this energetic West Wales-set crime film, a debut from Ryan Andrew Hooper. The always watchable Michael Smiley provides a sardonic anchor amid the wacky chaos of renegade triplets and Elvis-impersonating aspiring crime kingpins. Smiley plays Brendan, a former criminal who has been hiding out for the past twenty-nine years by working solo shifts at the most isolated toll booth in all of Wales. But by chance he is spotted by a figure from his past. And the threat of retribution for his youthful misdemeanor is swift, its consequences messy.

A whole lot of loose ends to tie up

There’s a kinship here with some of the pictures which formed the post Lock, Stock wave of darkly comic British crime capers in the late 90s, early 00s. As such, The Toll might best connect with younger audiences for whom the blend of nihilism and quirkiness feels relatively fresh. Following the film’s premiere during the virtual Glasgow Film Festival, local interest might support a Welsh release, or streaming interest elsewhere.

A choppy, non-linear timeline teases the audience by revealing only part of key events at first, later returning to fill in the blanks. It’s an approach which runs the risk of disrupting the momentum of the storytelling, but in this case, there is barrelling stamina to spare. Much of this is injected by a forcefully eventful score; a music choice which is ironically overstated, given the slow pace of life and narrow horizons in this Pembrokeshire backwater. The score, like the story itself, nods to the traditions of the Western; the photography captures a landscape which, while it lacks the drama of the midwest of America, boasts some of its bleakness.

The humour is mined from the juxtaposition of the parochial – Brendan’s sad little shed, with its thermos flask, neatly stacked ring binders, cork board and sellotape dispenser – with the relentless and unpredictable violence which is triggered by his cover being blown. Coincidentally, this happens on the same day that the identical triplet daughters of a local farmer decide to embark on an armed crime spree which, they hope, will lead to instagram celebrity. Unfortunately there’s not a lot to steal in this corner of Wales, so their heist on Brendan’s toll booth nets only a sandwich, some small change and a Pound Shop wrist watch.

Brendan might have been hiding out, but he hasn’t been living entirely on the straight and narrow. So he is able to call upon the assistance of Cliff, (Paul Kaye) an ambulance driver with a novelty hat and a weakness for dogging; and Dom (Iwan Rheon), whose main character trait is that he spits a lot. Representing the town’s moral compass is traffic cop Catrin (Annes Elwy), who is still mourning the unsolved death of her father, victim of a hit and run accident a year before. Finally, confusion between ‘iPads’ and ‘eye pads’ has incurred the wrath of an Elvis-impersonating gangster and her inarticulate sidekick. That’s a whole lot of loose ends to tie up and, despite a big chunk of third act exposition, a screenplay which is only partially successful in doing so.