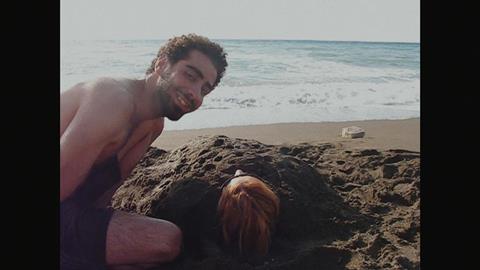 Since the Arab Spring spread across the Middle East, footage of mass uprisings violent reprisals hasn’t been far from our screens. These scenes are peppered throughout The War Show; however they’re not narrator and co-director Obaidah Zytoon’s primary focus. Working with Andreas Dalsgaard, the broadcast journalist turned first-time filmmaker tells the raw tales that lurk behind the visible signs of protest: the dreams chased and dashed, the everyday lives oppressed and transformed, the bodies battered and beaten, and the other individual prices paid.

Zytoon’s journeying effort doesn’t just hit home, but does so with devastating force.

Accordingly, The War Show marries the on-the-street immediacy of Silvered Water Syria Self Portrait with the more domestic focus of A Syrian Love Story, once again laying bare a conflict that has been recounted before yet never proves any less shocking. Such an effective, unsettling contrast of the broad and the intimate makes the film a galvanising choice to open Venice Days, as well one that won’t quickly be forgotten. Expect audiences to be similarly jolted when the powerful documentary screens in Toronto, and for further festival play to follow

A project initially which began with a group of friends as an attempt to document what was going on around them, it’s the juxtaposition of thriving street crowds chanting their dissatisfaction with the ruling regime — and bearing the physical, emotional and sometimes fatal consequences — with ordinary moments and conversations that ensures Zytoon’s journeying effort doesn’t just hit home, but does so with devastating force.

One by one, Zytoon introduces the fellow mobilised artists and activists she calls her chosen family, as well an adopted dog she shampoos lovingly; one by one, their stories move from impassioned exuberance to sombre realisation or worse, and from striving to effect change to wearing the steep costs of those efforts.

With the film subtitled “From Revolution to War in Seven Steps”, she shapes their increasingly harrowing experiences into stages, with each only making the truth behind a telling mid-film comment all the more heartbreakingly apparent. In Syria, she notes, “you either struggle for a decent life or accept death”.

Confronting images captured by Zytoon and her fellow cinematographers Dama Bakdounes, Amr Kheito, Hisham Issa, Wasim Anonymous and Lars Skree — of men showing their scars and wounds; of babies crying, and some remaining silent; of children brandishing and firing semi-automatic weapons — further stress the point, almost relentlessly so. Most documentaries could only hope to include as many striking, lingering, moving moments. Of course, that The War Show’s frames are steeped in pain, suffering and tragedy remains inescapable.

So too does the documentary’s constructed nature, and not only in the wearied tone with which Zytoon voices her poetic, thought-provoking narration as she ventures between Damascus, Homs, Zabadani and the country’s north. The frequent use of a shuttering effect, aping the act of taking a photograph complete with a momentary flash of darkness and corresponding sound, continues to emphasise the film’s status as a personal record. And yet, it’s only one aspect of The War Show’s probing of its own existence.

As their chosen title indicates, Zytoon and Dalsgaard remain cognisant of the show they’re creating as much as the theatre of war they’re chronicling. Whether detailing her own run-ins with ruling forces or turning the lens towards others, the camera can’t be ignored, and nor can its impact.

Early in the piece, it’s the fact that Zytoon is filming that draws the authorities to her; at different points, other demonstrators act up, shy away or otherwise modify their behaviour once they know they’re being recorded. Compiled together, deftly whittled down from 300 hours of footage by editor Adam Nielsen, and designed to convey the reality of life in Syria today, their varied reactions scream of horror but whisper of resilience. Both are directed towards an audience, and often, both are literal.