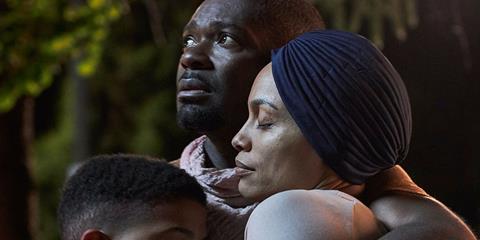 The directorial debut from David Oyelowo is a rewarding, (older) family-friendly adventure which packs some crisply executed moments of nail-biting peril into a moving story which deals with grief, loss and newly forged friendships.

Gunner (a lovely, soulful performance from Lonnie Chavis) and his family have newly moved to the town of Pine Mills. But Gunner has to adjust not only to being the new kid in town, but to building a relationship with the largely absent father Amos (David Oyelowo) who has resigned his naval commission to care for Gunner’s gravely ill mother Mary (Rosario Dawson). An avid reader, Gunner (12 years-old, at a guess) stumbles on a book which suggests that the local legend of The Water Man might hold the clue to saving his mother. His quest to find the mythical figure that haunts the forests unites him with Jo (Amiah Miller), a girl who weaves fantastic stories to cushion herself from a sadder truth.

Oyelowo’s intention with the film was to enable young black children to see themselves represented in the kind of rich adventure fantasy picture which has its roots in 1980s Hollywood. Spielberg is a clear influence, as is Stand By Me, but there’s also a thematic parallel with the more recent A Monster Calls. The picture’s scariness will take it out of the domain of younger kids, but older children and teenagers should relish the skittering menace of threats both real and imagined. It’s a film which would benefit from the collective experience of a theatrical release but could certainly hold its own on a VOD platform.

Closer to his creative mother than his authoritarian father, Gunner is a sensitive, artistic soul who draws a supernatural graphic novel in his spare time. His sketches are brought to life sporadically in little animated segments. But a more striking visual aspect is the film’s vivid drenching of colour. Vibrant amber hues flood into every frame – from the hoodie that hangs on Gunner’s lean frame, to the graffiti on the walls to the light which glances off his cheekbones at night.

The choice of yellow ties into the mythology at the heart of the film. Alfred Molina, slightly underused as a cantankerous local eccentric, reveals a key back story about the mysterious Water Man, the “tall, shadowy figure” spotted by generations of locals “emerging from a lake, with fire on his chest and hungry hope in his eyes.”

Water Man was a past resident of the town who found a seam of glowing yellow rock while working in the mine. Shortly afterwards, a nearby dam burst, drowning all its inhabitants. All, except the man in possession of the rock, a mineral which “has no value to the living but is invaluable to the dead”. He came back to life and spent his immortality seething and searching for the remains of his dead wife so that she, too, could be reanimated.

Blue-haired outlaw kid Jo claims to have seen the Water Man, displaying a fresh scar on her neck as proof. Dishonesty is not in Gunner’s register; it doesn’t occur to him to question her claims. So, equipped with his father’s samurai sword and all his savings, he sets off with Jo to learn the secrets that lurk in the woods. As locals repeatedly warn him, the forest is a pretty spooky place, and Oyelowo flirts with horror devices as indistinct shapes brush past the periphery of Gunner’s head torch. But in addition to the shadowy threats, there’s a more immediate danger: a forest fire threatens to cut the children off from safety. The supernatural mystery morphs into a nail-biting escape.

While Gunner might not find what he had hoped for the film still finds a satisfying, if sadness-tinged conclusion which doesn’t talk down to its young audience.