'The Woman Who Left': Venice Review 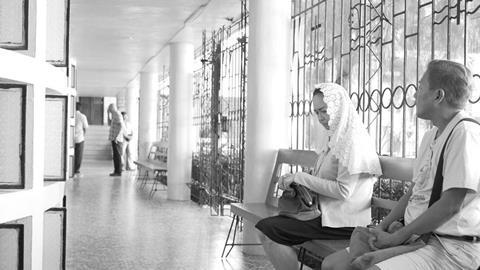 Time is relative in cinema as in all things, but it becomes particularly fluid in the work of Lav Diaz, the marathon man of the Philippines. It’s an oddity that some of Diaz’s longer experiments in durational cinema – films such as Melancholia or this year’s A Lullaby to the Sorrowful Mystery – at seven and eight hours plus, respectively - can sometimes seem considerably shorter than they are, partly because of the immersive watching state that they induce. Conversely, the more concise The Woman Who Left – at 226 mins – carries its running time rather less lightly, and certainly feels less satisfyingly dense than the slightly longer Norte, or the End of History (2013).

At once over-repetitive and less surprisingly digressive than some of his other films, The Woman Who Left may not represent Diaz at his absolute peak, but it’s a powerful, thoughtful melodrama that pulls you into its world and delivers a number of irresistible emotional coups. Commercial exposure will be as slim as ever, but for festivals, a Diaz film is always an event and, given its comparative brevity, this will be a more accessible event than usual.

Where Norte was inspired by Dostoevsky’s Crime and Punishment, here Diaz takes his cue from a Tolstoy short story, God Sees the Truth But Waits.

The resulting drama, in a more hard-headedly realist mode than some of Diaz’s work, is set in 1997, when – radio newscasts tell us – the Philippines was experiencing a wave of kidnappings, although these don’t play a direct part in the story. The heroine is Horacia (Charo Santos-Concio), a former teacher who has spent 30 years in prison for a crime she didn’t commit; one day, she is released, her friend and cellmate Petra (Shamaine Centenera-Buencamino) having confessed to framing her at the behest of Horacia’s vengeful ex-boyfriend, the wealthy Rodrigo Trinidad (Michael de Mesa).

Horacia goes home to find that her husband has died and that her son has gone missing. Moving on, Horacia keeps an eye on Trinidad, meanwhile becoming friend and benefactor to a number of social outsiders, including a disturbed homeless woman, a hunchbacked vendor of balot (eggs containing embryos) and Hollanda (John Lloyd Cruz), a cross-dresser with epilepsy. Horacia – known in her new life by the symbolic name ‘Renata’, the ‘reborn one’ – becomes a figure of endless generosity and grace, but she’s also capable of contemplating violence, as she plans her revenge on Trinidad.

Diaz pulls one of his phenomenal one-man-band acts here, including editing and shooting the film – which he does in his characteristic style of composed long-take shots with a fixed camera, in beautifully sharp chiaroscuro that produces stygian black for the many night scenes (there’s also a brief, startling move to hand-held late in the day).

That formal approach allows him to maximise the emotional effect of the acting, via a stance of compassionate detachment. He has the advantage of some terrific acting here, notably from Cruz, who particularly excels as Hollanda in the final hour, and Santos-Concio, acting in a film for the first time in 17 years after building a successful career as a producer and media executive: she shows a phenomenal range of shading as the elusive, changeful Horacia, as well as an imposing but gentle authority.

If the film feels arduous in stretches, it is because Diaz settles into a repetitious groove alternating between small-town scenes by day and by night, as Horacia keeps the late watch with her egg selling friend. It is only later, during a terrifically moving extended two-hander sequence between Horacia and Hollanda, that the film really catches fire.

Diaz’s narrative strategy is tantalising, often frustrating – the enigmatically menacing Trinidad is left a little too much on the sidelines, and Diaz likes to go deep into long stretches of dead time while keeping key dramatic incidents hyper-brief or eliding them completely. He also arguably blows his dramatic impact with an extended coda that takes the story in a new direction, although he also gives us a brief sequence that foregrounds the film’s real-world political theme - the abuse of power by the Filipino rich and the government’s contempt for the poor who are, as ever, Diaz’s key dramatis personae.