Melissa McCarthy and Octavia Spencer suit up as superheroes for Netflix 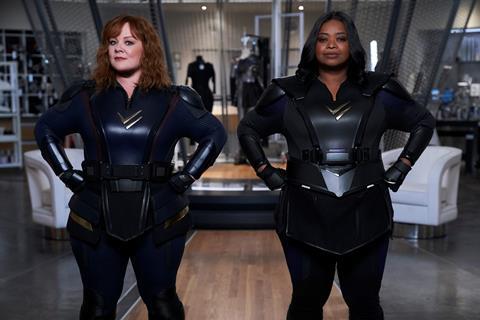 It’s not going to save the world, but neither will Thunder Force, a high-concept superhero comedy, do it much damage. Good-natured, soft-hearted, a little lazy, and propelledby the relentless charisma of Melissa McCarthy when all else fails, this Netflix production makes for cozy pandemic at-home viewing with scant thrills but a couple of genuinely funny moments, particularly between McCarthy as an out-of-condition, beer-swilling Chicago forklift-truck operator turned strongwoman superhero and Jason Bateman, her nemesis/love interest The Crab (“hold it, calamari!”).

None of this is new, especially for McCarthy’s fans

As her partner in crime-busting, Octavia Spencer is warm, game, and yes, totally miscast - but that’s rather the point of this superhero takedown. After last year’s disappointing Superintelligence, also made with her husband/director/writer/producer Ben Falcone, McCarthy seems to have found a suitably soft landing for her talents on Netflix, which won’t challenge Disney+ with Thunder Force, yet should still see the numbers click up.

In the same way that Twins paired Danny DeVito and Arnold Schwarzenegger, Spencer and McCarthy rely heavily on the physical gag of their entering the ripped superhero pantheon for this story of two mis-matched, middle-aged women who suddenly find themselves with superpowers. (McCarthy’s Lydia is super-strong, while Emily, played by Spencer, has invisibility as her special power). Underneath this unlikely scenario, though, lies a story of childhood friendship and estrangement between the pair which gives the film its heart.

Thunder Force starts out in a mid-80s Chicago besieged by ‘miscreants’ – supervillains and psychopaths by nature. When Emily’s geneticist parents are killed by one, she moves to Lydia’s school (sweetly, and quite remarkably from a physical perspective, young Lydia is played by McCarthy’s lookalike daughter Vivien). The pair become firm friends, but Emily is obsessed with avenging her parents’ deaths by devising a formula to counteract the miscreants, while Lydia just likes to goof around. They part ways, until Lydia hunts down her former soul-mate on the night of their 25th High School reunion – with apocalyptic results.

Falcone’s comic book spin is a simple premise – casually executed in parts – which relies on charisma and talent to make it fly. By now, after 2014’s Tammy on up to The Boss and Superintelligence, McCarthy and Falcone have found an easy-going, familiar groove as collaborators, as well as a team of players they like to work with. (Spencer alternated with James Corden as the voice of the AI in Superintelligence; Bateman co-starred with McCarthy in Identity Thief; chief villain Bobby Cannevale has appeared in several of their films). They’re certainly not here to push any envelopes, coasting by on McCarthy’s familiar schtick and kicking around with the hodge-podge of a plot (Cannevale’s The King barely has a distinguishing feature, although Bateman’s absurdly fake crab pincers do compensate).

The soundtrack, which includes Seal and Glenn Fry, helps cement the humour, and comic book-like production qualities are solid for what Thunder Force is attempting (they’re quite good value, in fact, although supervillain Laser, played by Pom Klementieff hopping over from Guardians of the Galaxy 2, could have done with more of a charge).

While McCarthy and Bateman connect, Spencer shows little of their flair for physical comedy. While that’s often patently obvious, especially in the suit, her graceful performance acts quite nicely as a counterpart to McCarthy’s Van Halen-loving brewski-chugging brashness, and the Oscar-winning actress always manages to look like she’s having a good time. Melissa Leo also turns up as the superhero operation’s mastermind; her character drops off, but she’s always a draw.

Some gags land and some don’t, but the cast doesn’t seem to mind either way, and neither will the audience. None of this is new, especially for McCarthy’s fans, but that doesn’t make it bad, or disappointing, just comfortably familiar. And, meanwhile, there’s a running joke involving raw chicken breast, and a Fleetwood Mac-style crimped-hair dance fantasy sequence between Lydia and The Crab, which are straight-up funny. Right now, that counts for a lot.