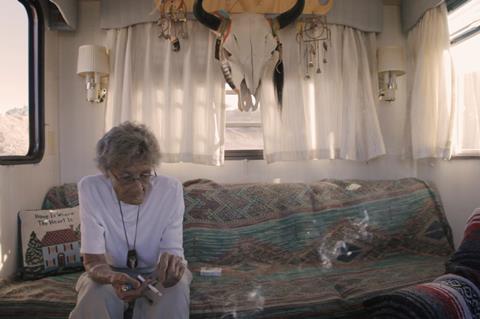 In Truth Or Consequences, director Hannah Jayanti goes exploring in a small, destitute New Mexico community, befriending locals who seem as cut off from the world as their city is. Frequently touching in its exploration of stasis, her film meanders lovingly in order to acclimate to its subjects’ laidback, reflective personalities. Sometimes the film’s structural ambitions get the best of it, but it has a wealth of revealing talk, with the residents opening up to Jayanti’s camera, pouring out their hearts and examinaing their circumstances in this metaphorical purgatory.

A place outside of reality.

In the midst of a busy festival run, Truth Or Consequences now screens as part of DOK Leipzig. The film’s gentle rhythms and unassuming individuals may not make this the most dynamic of prospects, but those interested in being put in a wistful, dreamlike mood would do well to get on board.

The town of Truth or Consequences, New Mexico has a quirky history: once called Hot Springs, about 70 years ago it agreed to rename itself as a part of a publicity stunt for the then-popular game show Truth Or Consequences. More recently, its claim to fame has been that it’s nearby Spaceport America, the first commercial spaceport. (If you’d like to take a trip to outer space, however, it will cost you the princely sum of $250,000.)

Jayanti (who previously made Topography, a look at people with a deep personal connection to America’s national parks) is less interested in that trivia than in the hearty souls who choose to live in an economically depressed community in the middle of the desert. She focuses on a handful of subjects, including a 30 year-old woman named Katie who has just moved home after years away and Yvonne, a cigarette-smoking senior citizen with several lifetimes’ worth of stories.

The people to whom Jayanti gravitates appear to be loners, slowly opening up about what brought them to Truth or Consequences. During these interviews, we almost never hear from the filmmaker (who also served as cinematographer and editor), and as a result her subjects’ comments feel like hushed monologues — long pent-up confessions that they are finally ready to reveal.

The film segues from these conversations to virtual-reality worlds utilising a technology known as photogrammetry, which produces 3D models of existing 2D images. The trippy effect renders the New Mexico landscape and the subjects’ domiciles as if they were sci-fi realms, a nod to the town’s nearby space-travel business. But while temporarily visually intriguing, the technology largely feels like a distraction when the people we meet in Truth Or Consequences are far more engrossing.

Assisted by an improvised, sometimes shimmering score from guitarist Bill Frisell, Jayanti successfully puts the viewer into the mindset of a place outside of reality. The streets are empty, and the surrounding natural world seems ready to absorb the city at any moment. That lack of activity reflects Katie’s malaise: she thought coming home would be a good idea, but there are few decent jobs and little hope to get a higher education, leaving her feeling stuck. Others are in their own kind of limbo, including a middle-aged man named George whose occupation seems to be collecting salvageable refuse from the wilderness and bringing it home to his junkyard museum.

But Truth Or Consequences’ unexpected star is Yvonne, who first tells us of her harrowing time in the circus, only to unleash a few more surprises — some of which are heartbreaking. Occasionally, this observational documentary can be repetitive in its languid pacing, but in some ways that unhurried tone only makes Yvonne’s unburdening all that more affecting. Society has left these people behind, but Jayanti demonstrates why their stories need to be told.