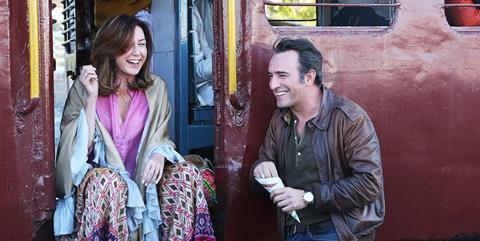 An elegant, melancholy love story, Un Plus Une takes a very ordinary premise — two people who are already romantically attached to others quickly form a close emotional bond — and produces a delicate drama that’s often ineffably lovely. Director and co-writer Claude Lelouch aims for something wise and wistful in this tale of a carefree composer (Jean Dujardin) and an ambassador’s wife (Elsa Zylberstein) trying to make sense of the growing attraction between them, and although the film has clear problems, Un Plus Une’s modest, considerable strengths are such that the smitten may choose to overlook the flaws.

Although Lelouch conveys a respectful affection for India’s seemingly transformative qualities, the movie can be awfully patronising in its depiction of the country and its people as an almost mythical cure-all for Western ills

Premiering in Toronto’s Special Presentations section, Un Plus Une will be opening in France in December, with international markets undoubtedly more favourably predisposed because of Dujardin’s involvement. Older arthouse viewers seem to be the ideal audience for this reflective, talky romantic drama, and enterprising distributors would do well to play up the film’s surface similarities to other ships-passing-in-the-night films such as Before Sunrise.

As the story begins, Antoine Abeilard (Dujardin), a famed French film composer, is in the midst of a happy relationship with the younger Alice (Alice Pol). Traveling to India to score a local romantic drama, Antoine meets Anna (Zylberstein), the vivacious and charming wife of the French ambassador (Christophe Lambert). Sensing an instant connection, Antoine and Anna conspire to find more and more opportunities to hang out. And although their relationship remains platonic, the depth of their conversations and the potent flirtation between them makes it obvious that something could soon happen — especially after they venture on an impromptu odyssey across India.

In its opening stretches, Un Plus Une is remarkably warm, funny and romantic as the interactions between Antoine and Anna sparkle. Like in many new love affairs, these characters’ exchanges are full of lively talk, bountiful laughs and the palpable excitement of making a deep connection with another soul. Dujardin and Zylberstein’s chemistry is magnetic, the characters finding themselves drawn to one another while being acutely aware of the consequences inherent in acting on their impulses.

Consequently, Lelouch’s film is, for most of its running time, a rumination on the fickleness of love — how luck, circumstance and even temperament can affect attraction. (Long-time married Anna believes the universe responds to our positive outlook, while pragmatic, womanising Antoine dismisses such cosmic thinking as nonsense.) Because the characters don’t immediately jump into bed, Un Plus Une is a sexy tease in which the dialogue’s wit and thoughtfulness becomes seductive foreplay. Antoine and Anna are physically attracted to one another, but they’re also turned on by each other’s essence and worldview.

Unfortunately, Un Plus Une does stumble. Although Lelouch conveys a respectful affection for India’s seemingly transformative qualities, the movie can be awfully patronising in its depiction of the country and its people as an almost mythical cure-all for Western ills. And while Zylberstein is heart-breaking as Anna, a woman who loves her husband but cannot deny the kinship she feels toward Antoine, Dujardin can slide into cutesy adorableness. On one hand, his character is meant to be a bit shallow, but the Oscar-winning actor fails to reveal new layers within this man that are unearthed after encountering the soulful, searching Anna.

These deficiencies are obvious and inarguable, but Lelouch mostly overcomes them by focusing so intently on the ways that love transforms people — as well as transforms those unwittingly affected by their lover’s sudden infatuation with a new partner. Weaving fantasy sequences and flashbacks into the narrative, the veteran filmmaker examines how we tell and retell our own love stories, and whether any of them can last.