'Under The Wire': Sheffield Review 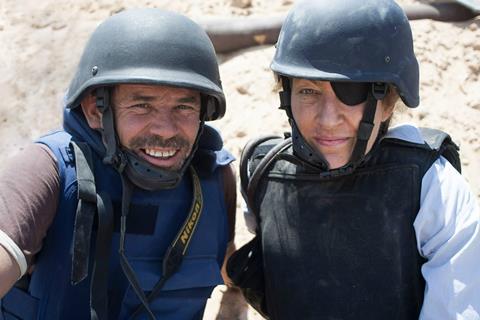 Knowing the tragic fate of war correspondent Marie Colvin and photographer Paul Conroy does nothing to diminish the impact of Under The Wire. Christopher Martin’s documentary adaptation of Conroy’s book is a powerful, humbling salute to a breed of fearless figures willing to risk their lives as they bear witness to history’s unfolding horrors. The subject matter and deft handling should make the film both a continuing presence on the festival circuit and a significant commercial prospect in the documentary field.

Martin has two of the essential elements for a gripping documentary; eloquent survivor’s testimony from the gruffly charismatic Conroy and extensive footage of the events he endured. Placed side by side they make for an intense, enthralling immersion in front page news.

Conroy paints pictures with his recollections and captures the spirit of Marie Colvin with warmth and affection. A renowned war correspondent with her trademark eye patch, Colvin carried a formidable reputation for placing herself in the firing line to report hard truths to the wider world. Some considered meeting her exacting standards more terrifying than the possibility of entering a war zone. Paul Conroy, however, found himself on exactly the same wavelength and became her trusted photographer and colleague.

The documentary focuses on events in 2012, as Colvin and Conroy illegally entered Syria to report on the merciless shelling of the rebel stronghold in Homs. Colvin always sought the human casualties of war, giving a voice to the powerless. In Baba Amr, she reported on wholesale slaughter, trying to prick the conscience of a western world that seemed unwilling to intervene or call the Syrian regime to account.

Conroy’s footage from 2012 is so vivid and immediate that it places the viewer right at the heart of events. You are beside the duo as they hare through the pitch black night to cross the border undetected. You feel the shudder of shell fire, witness the loss of life and enter the infamous widow’s basement filled with women and children seeking some sanctuary from the incessant bombing.

Conroy’s hindsight commentary on events deepens the experience, adding to our understanding of what was at stake and the risks they were both prepared to take. Carefully selected friends and colleagues broaden the picture, as we hear from Colvin’s close friend Lindsey Hilsum, French journalist and Homs survivor Edith Bouvier and Syrian translator Wa’el, an animated and hugely engaging figure.

Knowing that the situation in Homs would deteriorate and that Colvin and Conroy chose to return only adds to the sense of dread that wells up as the film advances towards February 22nd, 2012 and the deaths of Colvin and French photojournalist Rémi Ochlik.

The story didn’t end there, though, and what subsequently happened to Conroy maintains the grip of the film until the final frames. There is probably a great sweeping drama to be made from all of these stories but it is hard to imagine how it could surpass this gripping retelling of the real thing.

Screenplay: Chris Martin based on Under The Wire by Paul Conroy