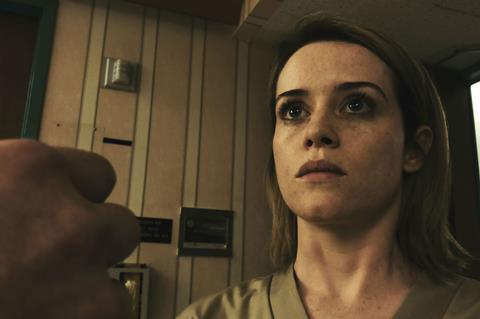 All is not what it seems in Stephen Soderbergh’s Unsane – which would be fine except that this is the kind of all-is-not-what-it-seems psychological thriller that requires the audience to take leap after leap of faith for it to carry any weight at all. What certainly buys Unsane considerable credit is a compelling lead performance by Claire Foy, abandoning the regal decorum of The Crown for a tough-dame American role that’s pretty generic but that she carries off with confidence and fire.Returning to the knowing twistiness of his 2012 thriller Side Effects, Soderbergh makes Unsane work teasingly, until things edge too far into the realms of the Gothicly lurid to be remotely plausible.

It’s good to see - now that Soderbergh has returned to movies – that he’s no less experimentally inclined than he was, even on a mainstream project like this

Still, admirers of Soderbergh’s experimental tendency will applaud the film’s execution – it was shot on the iPhone 7 Plus – while this story of a tenacious woman fighting all odds should have added appeal in this #MeToo moment. For a mainstream genre piece, however, the narrative execution is a little too cavalier to guarantee audience satisfaction.

At base, the film’s theme is the damage done to female psyches by male insanity – and by the institutions that collude with or support it. Foy plays Sawyer Valenti, a young financial analyst who is skilled at her job and highly controlled in her life. A date scene at the start shows the brittle Sawyer laying down the ground rules for engagement on her terms. Then we gradually discover her back story: she moved from her Boston home to start a new life in Pennsylvania in order to get away from the traumatic experience of harassment by a male stalker.

Still troubled, Sawyer visits a therapist at a clinic called Highland Creek, but her talk of feeing suicidal – and her careless signing of a supposedly routine document – leave her interned in a mental ward there, initially for 24 hours. As a Kafkaesque situation develops, with Sawyer’s sanity under question and her commitment period extended to a week, every attempt to convince the authorities that she’s sane – together with her naturally angry responses to their intransigence – gets her into ever deeper water.

While her mother (Amy Irving) seems to offer some hope of release, Sawyer makes friends with fellow inmate Nate (Saturday Night Live’s Jay Pharoah), who explains the real financially-motivated workings of organisations like Highland Creek - an eminently sane theory, unless Nate is simply paranoid. But Sawyer’s own apparent paranoia shoots into the red when she starts seeing a face she’d rather not - which is where the film, having deftly trod an ‘is-she-sane-or-crazy?’ tightrope, steps off the rope entirely and vaults into the realm of grand guignol.

A somewhat theatrical confrontation scene staged in a blue padded cell restores the film to intimate psychodrama territory, but a cluttered series of final turns – including a lamentably corny deux ex machina – brings the whole construction crashing down. A brief coda, complete with ‘telling’ freeze frame, could almost be a nostalgic nod to the dubious heyday of 80s straight-to-video fodder.

One saving grace, at least, is the acting, with Foy maintaining Sawyer’s steely resilience along with her vulnerability, Pharoah providing a nicely relaxed note of charismatic calm, and Aimee Mullins creepily opaque as Highland Creek’s resident corporate cipher. The expressionistic execution works well, too, with Soderbergh’s own photography (under the usual name of Peter Andrews) exaggerating unusual angles and amplifying the empty spaces around Sawyer to maximally claustrophobic or isolating effect; harsh digital textures also intensify the emotional discomfort.

The experiment brings some extra artistic heft to a story that could have looked merely silly, if its gender politics theme hadn’t also added an edge of urgency. None of this, in the end, raises Unsane that far above the frustrating level of a tricksy head-wrecker, but it’s good to see - now that Soderbergh has returned to movies – that he’s no less experimentally inclined than he was, even on a mainstream project like this.