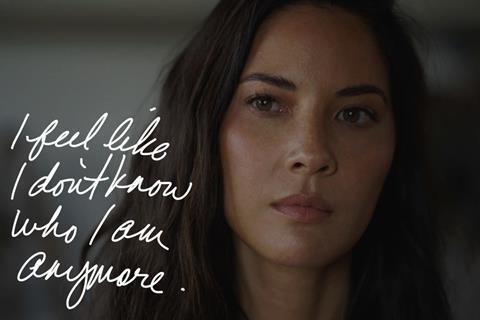 Can we ever turn off that negative voice inside our heads? In her feature debut, writer-director Justine Bateman fashions an entire narrative out of this common lament, focusing on a Hollywood development executive who slowly starts to understand the happiness she can harness once she decides to ignore that inner critic. Olivia Munn is quite touching as the title character, and the picture cleverly dramatises the conflicting thoughts that bounce around inside us and, often, dictate our lives.

Screening at SXSW as part of its 2020 Spotlight section of films that had originally been programmed for last year’s event before Covid-19 shuttered the festival, Violet will be a draw for fans of Munn — not to mention anyone who sympathises with the protagonist’s plight. This self-help tale may turn off those with little patience for therapy-speak — Violet is very much a film about feelings and psychological healing — and, unfortunately, the novelty of Bateman’s conceit does eventually start to wane. But the filmmaker’s sensitive handling of a universal dilemma — Why can’t I be happy? — should resonate with many viewers.

Munn plays Violet, a high-powered executive at a film production company who is beleaguered by a critical voice that both tells her she’s a failure and serves as a safeguard to make sure she doesn’t take any risks that might derail her career. Many people have such a voice, but we can actually hear hers (voiced by Justin Theroux) on the soundtrack as it berates her. (That voice is juxtaposed with words, written in cursive on the screen, expressing Violet’s unguarded, vulnerable feelings — which often conflict with the voice’s harsher message.)

Much of Violet involves observing how Violet navigates between these two sets of feelings — the written words which illustrate her genuine self, and the negative voice telling her how she “should” be in the world — while interacting with people in daily life. (For instance, when she’s tempted to share the details of a bad day with a male friend, the onscreen words say, “I want to tell you everything,” while the voice commands, “Stop!” in an attempt to keep her from seeming weak.) Bateman deftly illustrates how Violet faces casual sexism constantly at her job — and also how that negative voice makes her question her worth while preventing her from speaking up for herself, lest she jeopardise her reputation by “making a scene”. No matter how much her written words convey her actual desires, the voice instills fear in her, drowning them out.

This high-concept idea is brought to life by Munn, whose empathetic performance is strong enough that the dramatisation of Violet’s thoughts doesn’t overwhelm the character — a tricky thing to pull off considering that Violet has allowed that negative voice to dominate her life. (Adding to the visual tricks, Bateman sometimes amplifies a moment of high emotional intensity for Violet by having the screen slowly turn red.) Munn ensures that Violet always feels present, crafting a portrait of an insecure person who will finally shed negativity to become more fulfilled.

Luke Bracey is especially warm as Red, a screenwriter and the longtime friend who Violet has never allowed herself to view as a romantic interest. (The voice says he’s below her on the Hollywood food chain.) The two actors have a sparkling chemistry as Bateman explores how scary it can be to open up to someone — and also how rewarding it can be when the other person reciprocates. Playing Violet’s stereotypically terrible producer boss Tom, Dennis Boutsikaris is stuck representing the bland bullying force that our protagonist eventually overcomes, and in general Violet’s look at Hollywood isn’t especially insightful.

As part of her personal evolution, Violet will come to terms with how fear and pain have held her back — especially in relation to her difficult family and an ex-boyfriend — and while one roots for her growth, the film’s final third becomes a bit repetitive as she again and again masters the ability to ignore that voice. Theroux proves to be a convincing negative voice — stern and judgemental while rarely yelling — but the device grows tiresome once Violet begins to break free of its control.

Although many will relate to Violet’s grappling with self-doubt — that cruel realisation that we’re the ones holding ourselves back, not external factors — Violet’s overly precious final stretches get increasingly simplistic in their depiction of how people learn to live with their negative thoughts. Still, for a film about pessimism’s prevalence, it’s perhaps understandable why Bateman might want to introduce a little optimism at the end.