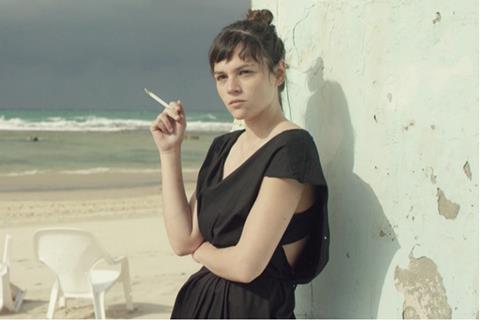 The small Israeli seaside town of Kiryat Yam is, for teenagers like Lana (Joy Rieger), a stagnant backwater. A driftwood community which has washed up in the town remains there because there is nowhere else to go. Lana, however, has plans. Tel Aviv, with its throbbing nightlife and possibilities, is calling her. But then, in her boredom, Lana weaves a story to an itinerant reporter about a mermaid sighting, and, unexpectedly, Kiryat Yam becomes the place to be. Director Keren Ben Rafael captures the itchy restlessness of coming of age in a town where there’s nothing to do, no trouble to get into. But despite a strong central performance and the mermaid plot wildcard, the inertia of life in Kiryat Yam makes for a slow-burning mood piece rather than a propulsive drama.

An eye-catching turn from Rieger will be a key selling point for this languid, loose-limbed first feature. Her fiercely charismatic presence, plus the film’s evocatively flyblown sense of place, should make this a fixture on the festival circuit. Theatrical prospects are less certain. The fact that the film is loosely woven around a real event – there really was a rumoured mermaid sighting in Kiryat Yam – might serve as a marketing tool for a domestic release.

This is the latest of a number of unconnected films which take the mermaid myth as a jumping off point to explore female sexuality: Agnieszka Smoczynska’s The Lure is another notable example. Tonally, there are also parallels with Léa Mysius’s heady tale of summer teen rebellion, Ava. The film’s title refers to sixteen-year-old Lana, who, despite her swagger and precocious boasting, is impatient to lose her virginity. It also references the mermaid – the direct translation of the Hebrew word for mermaid is ‘virgin of the sea’. And finally, the title refers to the innocence required to believe the story in the first place, shared by Lana’s pre-teen cousin Tamar and by the elderly man whose mother claimed to have seen a mermaid from the boat which brought her to Israel.

In addition to the fish woman, there is another visitor to the town who is causing almost as much disruption. Handsome charmer Tchipi (Michael Aloni) is a self-described poet and free-spirit, who quotes Dovlatov and scrapes a living by reporting on human interest stories for a local newspaper. It is his article, taken from Lana’s mischievous tall tale, which triggers mermaid fever. Lana eyes him with interest, crushing the hopes of the local boy who pines for her from the sidelines. The opportunistic mayor, also the lover of Lana’s mother Irena, offers a $1million prize for conclusive proof.

The stormy relationship between Lana and Irena fails to conceal the fact that mother and daughter are cut from the same cloth. And ultimately, the relationships between the women in the film, rather than their trysts with various feckless men, provide the film with its dramatic meat.

Damien Dufresne’s striking cinematography casts an unforgiving eye over the disappointed seafront where Irena and her deserted cafe are slowly going bankrupt. But it’s when the lens turns to Lana, scowl breaking over her face like a wave, that the picture comes to life.