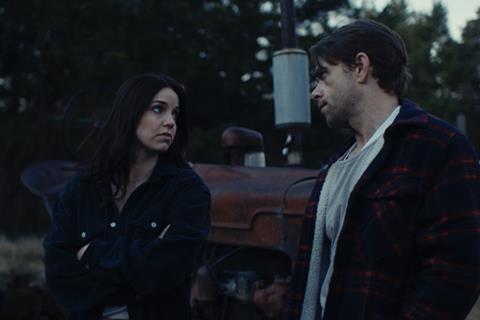 Bad blood runs through the Graham family, and the source of it is deep in the tainted earth of the farm where the three adult children, twins Eli and Mary and their younger brother Tommy, spent their unhappy childhoods. Divided into four chapters, this slow-burning and diffuse Southern Gothic drama follows each of the damaged siblings in turn as they weigh up the prospect of returning to the farm once more to sign off on its sale to an oil company. Sluggish pacing slightly undermines the film’s main assets — the strong performances from Kelli Garner as Mary and a suitably ravaged-looking Nick Stahl as Eli.

Patrick is well cast as Josiah, the fearsome and unpredictable patriarch of the Graham family

This is the third feature from director Vincent Grashaw, whose first two films, Coldwater (2013) and And Then I Go (2017), both enjoyed healthy festival runs, winning prizes at the Boston, Las Vegas and Rome Film Festivals. What Josiah Saw’s appeal might be more limited, although screenings at further genre events are possible. The casting of Robert Patrick and Nick Stahl, both alumni of the Terminator franchise, could attract interest, but without a tighter edit, this picture might struggle to assert itself in the theatrical landscape.

Patrick is well cast as Josiah, the fearsome and unpredictable patriarch of the Graham family. Frequently shot in looming silhouettes against windows and doors, he’s a hulking figure, shoulders hunched as if he’s about to throw a punch. Along with his son Tommy (Scott Haze), he is the only remaining Graham at the farm. Tommy is browbeaten and cowed by the presence of his father, who is constantly dripping poison into his ears about a debt which needs to be paid by the family, and a sin which has stained them all. Tommy, clearly a few spark plugs short of the full tractor, is bruised by a failed relationship and in denial about the restraining order that his ex-wife has slapped onto him. His father’s toxicity finds fertile ground in Tommy’s troubled mind.

Eli, meanwhile, wears his lifelong battle with drugs and alcohol deeply etched into his face. With a flyblown caravan for a home and a debt “of the substantial variety” to the wrong kind of person, Eli’s life is a permanent rock bottom. And while Mary, superficially at least, seems the most together of the siblings, there are hints of a deep-seated trauma in her decision, years before, to get sterilised. Now hoping to adopt with her husband, Mary is tightly wound and in denial. At night, the horrors of her past break through into her dreams.

The stark landscapes — the Oklahoma backdrop is evocatively used — suggest the emotional aridity of the childhood that all three endured. But the overly emphatic and intrusive score is less successful — from the opening scene, which appears to be accompanied by the howls of the undead, the music choices clearly signpost the fact that something is fundamentally amiss within the Graham family. Unfortunately, it takes a very long time before we finally discover what it is.