‘When A City Rises’: CPH:DOX Review 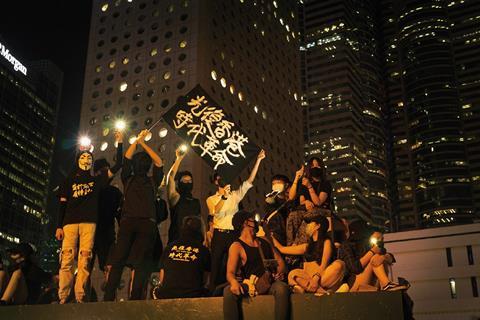 ‘When A City Rises’

Exceptional access, a wealth of nerve-shredding footage and impressively nimble work in the edit results in a film which is not only one of the most complete accounts of the Hong Kong pro-democracy protests to date, it’s also, at times, an unbearably tense picture which unfolds with urgency of a thriller. The film focuses on four main characters – a ‘frontliner’, a peaceful protestor, a naïve teenager and a law student, who narrates the film – all of whom found their own roles within the movement. But it is also enlightening on the broader informal infrastructure which supported the protests.

The escalating 2019 unrest triggered by China’s Extradition Bill has already been the subject of several previous films. Inside The Red Brick Wall, a gripping account of a two-week occupation of the Polytechnic University made by a collective of anonymous Hong Kong filmmakers, won a prize at IDFA last year; Bing Zhou’s Hong Kong Moments, which screened at Hot Docs 2020, explored the impact of protests on ordinary Hong Kong residents; and screening at this year’s Hot Docs is Jennifer Ngo’s Faceless, which shadows the hard core activists who made up the frontline of the protests. But even given the volume and generally high quality of existing coverage, When A City Rises deserves to be widely seen. Revealing on both the strengths and the problems of a ‘leaderless movement’, it is both an informative account and a propulsive piece of storytelling. The film should find further festival slots and may be of interest to specialist documentary distributors.

The 1997 handover of Hong Kong from the UK to China was accompanied by the promise of one country, two systems for 50 years, taking the territory up to 2047, with the hopes of an extension. But just over twenty years later, many Hong Kongers feared that the region’s autonomy is already under threat, and that freedoms might be impacted by the introduction of the Fugitive Offenders amendment bill by the Hong Kong government. The context and background to the unrest is explained in a voiceover by Eve, a personable and upbeat young law student who provides crucial background support during the protests, connecting those who need it with instant legal advice.

And many do. An overgrown kid with a plush toy dangling from his backpack and a weakness for overpriced action figures, M.J. is not entirely sure what he is doing at the protests. But despite the complaints from his girlfriend Jessie, who feels that his newly sparked political consciousness is impacting on their dating opportunities, M.J. knows that he needs to be present. But without the street smarts of more seasoned protestors, he soon finds himself arrested and released on bail.

Face obscured behind a gas mask, frontline warrior Tan has more at stake than many. He has a pregnant wife and a child at home; his arrest would impact on his entire family. But Tan’s allegiance to his fellow protestors is, for the time being at least, winning out over his family’s needs, despite his very real fear of “being suicided” by the police. The final, and least developed, character is William, a student who favours peaceful protest but who is pragmatic enough to equip himself with shin pads before venturing out onto the streets.

The film, which is credited to a collective of seven directors, paints a picture of an egalitarian movement, backed by community support – “parent cars” cruise the streets offering lifts to activists who need them; passing grannies bark out the offer of hot cooked meals for the hungry. But there’s the hint of a harder edge to the movement – a woman taking pictures is sprayed in the face with paint; a clearly traumatised student screams his anger and then breaks down during a highly charged meeting with the University authorities. Ultimately, although by the end of the film many of the dispirited protestors talk of leaving Hong Kong and Eve questions the point of studying laws which may soon lose their authority, this feels like a story which will continue to unfold.