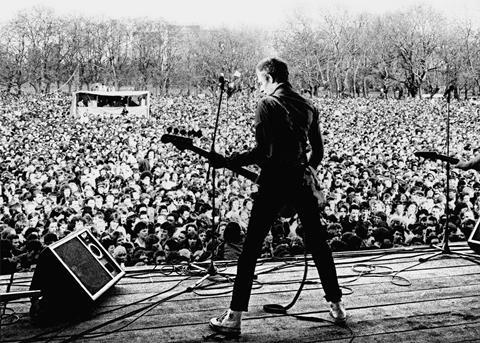 In the late 1970s Britain was in turmoil, with industrial strife and a lurch to the right which established the racist National Front as an ugly presence on the streets and a potential force in parliament. One salvation, politically and culturally, came in the form of punk rock, whose musicians were angry, rebellious, touching the hearts and minds of the nation’s youth, and many of whom were prepared to fight the fascists head-on. Rubika Shah’s highly engaging and suddenly very relevant documentary chronicles that confrontation, as partially led by the grassroots movement Rock Against Racism.

“Our job was to peel away the Union Jack to reveal the Swastika.”

An expansion of Shah’s earlier short film of the same name, this uses a lively amalgam of archive film and still images, animation and talking heads to take us back to the days of The Clash, X-Ray Spex, Sham 69 and, well yes, The Black and White Minstrel Show. TV would take a while to catch up. Given the recent debates about British identity and the spike in race hatred and racially motivated crime – all as a result of Brexit – the timing of White Riot couldn’t be more apt. Aside from a natural appeal to music and social history buffs everywhere, the film has a potentially strong appeal in the UK.

Shah economically sets her scene: mass unemployment and disaffected youth, an anti-immigration mood stoked by the right-wing press and the Conservative MP Enoch Powell, whose 1968 ‘rivers of blood speech’ is referenced here. In this environment, the NF is proudly “kicking its way into the headlines.”  Sparked by Eric Clapton’s infamous support of Powell during a Birmingham concert, Red Saunders, an agit-prop performer and music photographer, founds Rock Against Racism, which goes by the feisty acronym of RAR.

Saunders and his core band of fellow, mostly white anti-racists – a photographer, graphic designer, typesetter and office manager – are at the heart of Shah’s narrative. In a 70s TV clip Saunders wryly talks of the cultural aim to confront not just the NF, but “the all-round, family, British racism.” In the present, and looking far better for the 40-odd years, he gives an equally biting elaboration: “Our job was to peel away the Union Jack to reveal the Swastika.”

The campaign starts in a print shop in East London and centres on a fanzine, Temporary Hoarding, which features interviews and articles on racism and immigration, as well as other controversial issues of the day such as The Troubles. Without mobile phones and social media, this grassroots protest is on the streets – through pamphlets, posters, and concerts that featured reggae as well as punk bands, black alongside white.

The treasure trove of archive is variously appalling and inspiring, from racist raids on concerts and an ugly riot in south-east London in which police attack the anti-racist demonstrators, to interviews with schoolchildren eloquently, sweetly speaking out against racism and the landmark Carnival Against the Nazis, attended by 100,000 people and headlining The Clash, Tom Robinson and Steel Pulse.

Shah takes inspiration for the form of her film from the ‘cut and paste’ aesthetic of the fanzine itself. TV footage plays inside animated television sets, the camera pans across or jump cuts between magazine pages, stills, video and animation, as punk anthems pump up the soundtrack.

While some of RAR’s personal anecdotes can be a little twee, Shah’s indulgence of her subjects is forgiven given the nuance elsewhere, whether the acknowledgement of the racist elements within punk’s own following, or The Selector singer Pauline Black bluntly stating that, “Rock Against Racism was white people finally waking up to the fact that ‘Oh my God, there’s racism here’…. Black people were living it.”

And then there’s Topper Headon, drummer of The Clash, recalling how the right-wing ‘hijacked’ their song ’White Riot’, having focussed on the word ‘white’ but clearly not listening to the lyrics. Nobody ever said that racists were smart.