Set in a mining community in Eastern Denmark, this debut from Hlynur Pálmason is intense yet uneven 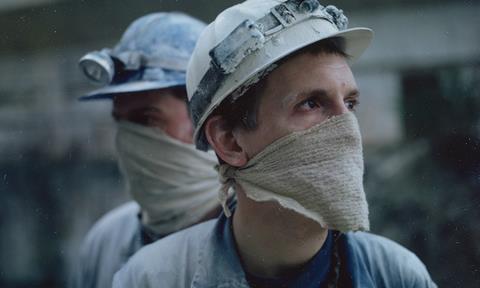 When even your sibling betrays you, all hope is gone in Winter Brothers (Vinterbrodre), an intense, wildly uneven psychodrama marking the feature debut of award-winning shorts director Hlynur Pálmason. Elements of craft and performance are very persuasive but the slight storyline and recourse to awkward flights of fancy make it a film that never quite gels. A modest degree of festival interest could follow its Locarno world premiere, especially among events championing new talent.

We seem to spend a lot of Winter Brothers in the dark, given that Emil (Elliott Crosset Hove) and his older brother Johan (Simon Sears) work down a limestone mine in a remote, inhospitable corner of eastern Denmark. Initially, Emil is a far from sympathetic character. An irrepressible mischief-maker, he will steal anything that is not nailed down, including the panties belonging to Anna (Victoria Carmen Sonne), the young woman who lives in a neighbouring cabin. He makes a little money on the side selling home brew to his workmates. There is a competitive edge to the relationship with his more sensible brother, but the two of them together are like feral, overgrown schoolboys.

Things change when Emil’s home brew is found to be lethal and a colleague’s life hangs in the balance. The world of work, colleagues and family seems to turn against him, inviting us to consider the lonely, lovelorn Emil more as a tragic victim. His status as an eccentric outsider is underlined by his plaintive confession that all he wants is to be “loved and fucked”.

Winter Brothers has elements of deadpan comedy but is only truly engaging in fits and starts. Elliott Crosset Ove does find the poignancy in Emil, investing him with the vulnerability of a Stan Laurel. There are some cracking individual scenes when Emil is called to account by his boss (Lars Mikkelsen) or when the tensions between Emil and his brother eventually boil over into a brutal, exhausting fight in which Johan is naked throughout and Emil comes close to losing his life. Emil’s acquisition of an automatic rifle and fascination with army training videos suggest that it will see service later in the story, an expectation that is unrealised, marking one way in which Pálmason tries to subvert convention.

Despite memorable moments, though, the story often feels like it’s drifting without exactly knowing where it is heading. Fantasy scenes seem to belong to Billy Liar and characters like Anna are underdeveloped.

The real star of the show is the cinematography of Maria Von Hausswolff who creates a vividly atmospheric picture of wintry landscapes and harsh working conditions marked by mud, snow and grime. Numerous scenes within the pitch black bowels of the mine use the lights of the miners’ helmets like a collection of fireflies in the night. The soundtrack is equally effective, capturing the throbbing noise of machinery and the way it makes conversations difficult to catch.

There are a lot of impressive individual elements in Winter Brothers: Pálmason just needs to put them at the service of more accessible storytelling next time around.