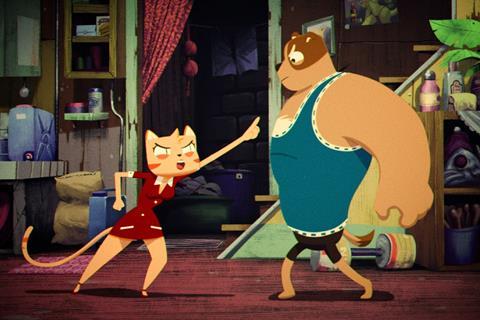 Inspired by telenovelas, Filipino animated feature You Animal! (Hayop Ka!) offers a boisterous swirl of sass, sex and soap opera hysterics. The tale of a frisky feline caught between two canine lovers is definitely not aimed at children, although the juvenile smut and misogyny on display may not entirely endear it to all grown ups either. The energy and attitude should still attract those in search of alternative animated fare.

The social criticism lends an edge to the surrounding silliness

Independently financed and produced, You Animal ! was available on Netflix in the Philippines last October. The fizzing colours and manic qualities suggest the influence of vintage Looney Toons and there is also something of the classic 1960s television work of Hanna-Barbera (Top Cat, The Flintstones etc) in the characterisations.

Nimfa (voiced by Angelica Panganiban) works as a perfume salescat in a Manila mall. She sends money home to support the education of her younger sister and has a devoted boyfriend in macho musclebound mongrel janitor Roger (Robin Padilla). She seems to have settled for a life of simple beef stew suppers together and his constant hunger for sex. A ’Beware Of The Dog’ sign above her bed is one of the wittier visual gags. “My bun is quite content with your hot dog,” she purrs. And they say romance is dead.

You Animal! has quite a fondness for the kind of smutty innuendo that might have graced a British ‘Carry On’ film. The script never lets an animal pun pass it by, with Nimfa’s workplace boasting Empawyees Lockers and various posters throughout declaring “Don’t Lion Around! Get To Work” or “You Have The Koalafications”.

Director Avid Liongoren tries on various comedy styles from romantic to screwball as Nimfa finds her life falling short of the romantic ideals she has absorbed from movies like ’Sleepless In Beagle’ and ’Made in Manggahan’. One day, wealthy, philandering hound Inigo Villanueva (Sam Milby) wafts into her life; his attempts to buy perfume for his mother’s birthday provides the “meet cute” that brings them together. A mix-up over the delivery obliges them to meet again. Inigo is smitten and has soon swept Nimfa off her feet and transported them both to his luxury seaside pad. What is a girl to do?

One of You Animal!’s strongest visual touches is the way it captures the class division between Nimfa and Inigo. Her world is all narrow streets and small apartments on the wrong side of the tracks, while Inigo lives in wealth and privilege. His mother’s mansion boasts sweeping staircases and walls festooned with family portraits. It is the social criticism that seems truest to the telenovela’s tradition and also lends an edge to the surrounding silliness, such as some vigorous, soft-focus sex scenes). Imfa’s sense of injustice and betrayal provoke some spectacular meltdowns (including a literal catfight) on her way to self-realisation and a potential happy ending.