'Rogue One' debuts top of the Chinese box office 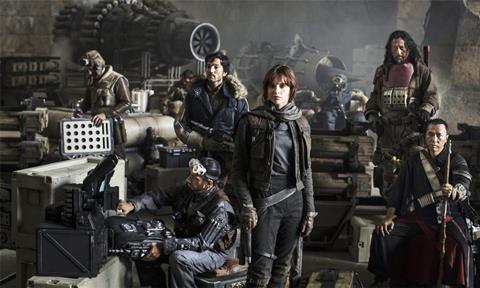 Disney’s Star Wars spin-off Rogue One: A Star Wars Story debuted on top of the Chinese box office in the first week of January (Jan 2-8), taking in $30.72m from its three-day opening weekend.

To draw the Chinese crowd, the new film has roped in local cast such as Ip Man action star Donnie Yen and renowned director-actor Jiang Wen.

Rogue One was the only new film that cracked the top five, narrowly ahead of local romantic comedy Some Like It Hot which was going strong in its second week with $27.97m for $53.04 after 10 days.

Zhang Yimou’s action fantasy epic The Great Wall slipped to the fourth with $11.16m for $160m after 24 days.

See You Tomorrow, starring Tony Leung Chiu-Wai and Takeshi Kaneshiro, dropped to the fifth with $5.22m. With a 17-day total of $67.68m, Zhang Jiajia’s directorial debut was able to match popular author-turned-director Guo Jingming’s Tiny Times 1.0, which was subsequently turned into a successful franchise.

Last week’s box office was down by approximately 24%. This week’s new releases include Passengers, Kubo And The Two Strings and Eye In The Sky, all scheduled for Jan 13.