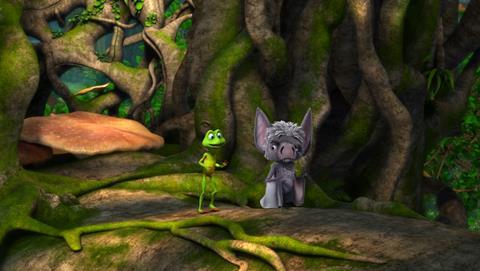 Directed and written by Chuck Powers, the film was recorded in Los Angeles with animation production taking place in Malaysia and India and development and post-production entirely in Malaysia. The bulk of the rendering was done in Hong Kong.

The film is the tale of a frog with an identity crisis.

“We have been in the entertainment business since 1992; however we realise that the best way for us to go global is via animated feature films and television shows,” said KRU president Norman A. Halim.

“We have gathered the best talents in the region for Ribbit. We also learned a lot from Crest’s experience in the production of Alpha & Omega, which was released in 2010 by Lionsgate. Currently we have a slate of animated feature films and television shows in the pipeline, some of which will be announced at the Marche Du Film [in Cannes] this year.”

Repped internationally by KRU’s sales and distribution arm United Studios, the film has been sold to more than 80 territories including the UK, Germany, Australia, Japan, China and Brazil.