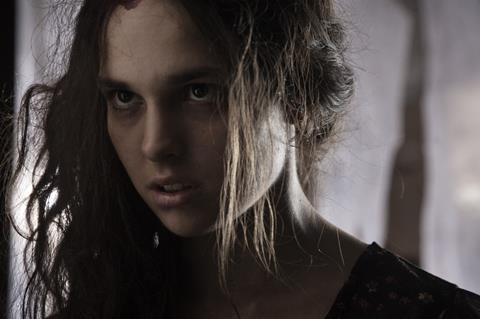 The meeting between a Sicilian mafia hitman and the blind sister of one of his victims is a catalyst for change in Fabio Grassadonia and Antonio Piazza’s feature debut. Like Paolo Sorrentino’s The Consequences Of Love or Leonardo Di Costanzo’s recent The Interval, Salvo defies our expectations of the gangster genre film, using a tentative but inevitably doomed boy-girl rapprochement to play off against the violence and suffering outside and stake a claim for humanity, even some kind of mystic salvation, in the midst of savage chaos. This it does convincingly, with a passion and intensity which, however, would be more effective if the characters had more depth and the whole thing didn’t feel so stretched.

Much of the imagery is pregnant with symbolism: in Italian, the name Salvo is also a verb meaning ‘I save’, and there is some business to do with the laying on of hands, and wounds on Rita’s palms.

Salvo is a reworking of the co-directors’ short film Rita, which told a similar story through much younger protagonists. Equally impressionistic in its use of the blind girl’s ‘point of view’, Salvo plays out in a hot and claustrophobic Palermo of rented rooms, jerry-built seaside houses, dark basements, mob-controlled streets and crumbling factories, and it’s the directors’ control of this oppressive atmosphere, their vision of a world out of joint, which stands out. This strength of vision will potentially help the film secure a few arthouse berths outside of Italy despite its narrative shortcomings.

The car radio news tells us we’re in Palermo, and in the middle of a heatwave, as we see Salvo (Bakri) and the tough-skinned but world-weary old Mafia boss he works for (Pupella) foil an attempt on the boss’s life. Searching for the man who ordered the botched execution, Salvo enters his beachfront house, and the adrenalin of the foot-chase suddenly slows down, and strays into existential mystery territory, as Salvo pads silently through the building, coming across the rival boss’s blind sister, Rita (Serraiocco), counting money in the basement.

The two enter on a charged, slow motion ‘chase’ through the house that is a premonition of how the relationship between them will develop. These first, almost dialogue-free twenty minutes, which display impressive control of lighting, off-screen noises and camera point of view, are utterly absorbing.

It’s not a problem at this point that we know so little about tough-guy Salvo or the young blind woman whose sight gradually begins to return when he inexplicably spares her, other than the fact that they are both victims in their way, pawns in a dirty game (this said, even Salvo’s boss, who like many of the Mafia rich lives in squalor, seems oppressed by his role in the organised crime charade).

But the script’s lack of interest in motives and backstories becomes an issue as the story meanders on and we gradually realise we aren’t getting much more than the here and now. With brother dispatched, Salvo locks a furious, desperate Rita in a room in a remote abandoned cement factory and returns, warily, to his life in a dingy rented room above a dry cleaner’s.

Here, in some scenes that verge on the dourly comic, a termagant of a mother tyrannises over her weak-willed son (Lo Cascio). Like a soldier returned from enemy territory, Salvo no longer quite fits in: he returns to his clan, but suspicion surrounds him, and, silent and observant as he is, he’s smart enough to realise this.

Rita, meanwhile, has been put on hold back in the cement works. Salvo, we feel, is not the only one who doesn’t know quite what to do with her. When after putting up a hell of a fight she suddenly thaws to her captor, it’s like the sudden thawing that comes in act three of a standard rom-com: it’s in the script, so we just have to take it on board.

Much of the imagery is pregnant with symbolism: in Italian, the name Salvo is also a verb meaning ‘I save’, and there is some business to do with the laying on of hands, and wounds on Rita’s palms. So is Salvo the hitman a saviour, a miracle worker? The question would be more interesting if we were more engaged by the characters that provoke it.