Rumours flew about the subject of Paul Thomas Anderson’s latest film during production. The director and his producer tell Andreas Wiseman about the real journey behind The Master. 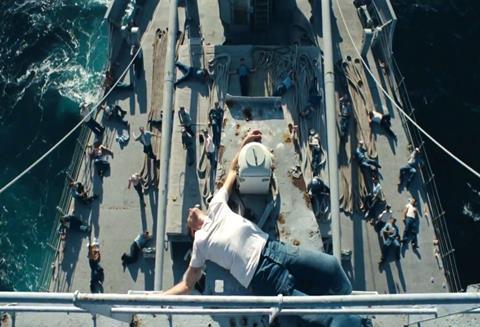 Prior to its world premiere in Venice — and a handful of preview screenings — speculation was rife that Paul Thomas Anderson’s The Master was a controversial reflection on the Church of Scientology. But the film has proved to be a far more nuanced and ambitious work than the rumours suggested.

The writer-director’s follow-up to 2007’s multiple Oscar-winning There Will Be Blood tells the story of a damaged Second World War veteran (Joaquin Phoenix) who strikes up an unexpected and complex friendship with Lancaster Dodd, the charismatic founder of a quasi-religious cult (Philip Seymour Hoffman) in post-war America.

The Master’s genesis was as fascinating and unpredictable as the relationship at the heart of the film. Potential financiers, distributors, key creatives, locations and even the film’s format all changed during its five-year journey to the screen.

“After There Will Be Blood, Paul initially met with Universal, who paid him to write a spec script,” explains JoAnne Sellar, who has produced Anderson’s six features to date alongside Daniel Lupi. “However, the project wasn’t fully formed in Paul’s mind and as he likes to take his time to write, it wasn’t until 2009 or 2010 that he delivered the script.”

The script Anderson had been working on was not the Scientology exposé that many had assumed. It was in fact a combination of a number of elements the director had long been fascinated by, including Phoenix’s character Freddie Quell, war stories from his father and the actors Jason Robards and Robert Downey Sr, the lives of John Steinbeck and L Ron Hubbard, unrealised fragments of There Will Be Blood, and a fascination with the fertile and disjunctive post-war period.

“It was a process of collecting stories and hoping they found a home with other things,” recalls Anderson. “Jason Robards told me a story about coming back from the South Pacific after VJ Day on a ship which had run out of booze, for example. The crew broke into the torpedoes to get at the grain alcohol fuel. The soldiers would collect fruit from the islands and mix it with the 180-proof grain fuel to make ‘torpedo juice’. That was quite common. Robards also woke up on the mast of the ship one day, teetering on the edge [in reference to a remarkable scene in the film]. I always wanted to get that into a film. And yes, John Steinbeck worked the sugar beet fields in California during Prohibition.”

The post-war era was a key inspiration to Anderson, Sellar recalls: “Paul became fascinated by reading about the time. It was a period when all kinds of lost souls were re-entering society after being at war. They were without money and were drifting along, not knowing what to do with themselves. A number of philosophical organisations became crutches for them — a dysfunctional kind of family.”

By the time Anderson delivered his script, the financing landscape had already begun to significantly shift in the US: “Universal had undergone a lot of changes,” Sellar says. “There weren’t many players making big-budget or medium-level art films anymore. A lot of the indie majors, like Miramax and Paramount Vantage, with whom we’d done There Will Be Blood, and Warner Independent, had closed shop. There was a big lull in the type of people who would want to make our kind of film.”

The project went into turnaround. But its inherent strength meant a number of established companies were still keen to back the film, including River Road and Warner Bros. When Philip Seymour Hoffman’s other shooting commitments meant the production would have to start rolling sooner rather than later, however, Anderson decided the production wasn’t quite ready and he would take more time to work on the script.

“It was during that time of postponement that we met with Megan Ellison of Annapurna Pictures,” says Sellar. “She said she wanted to wholly finance the film’s $30m budget and that she was happy to go slowly, which was music to our ears.”

It was at this point that Anderson also decided to relocate the shoot from the East to the West Coast of the US after discovering the former naval base Mare Island in California — which became one of the film’s key locations — and the crucial sailing boat, upon which much of the film is set. Other locations were in and around Los Angeles, San Francisco and Hawaii.

While some elements solidified, others eroded. The change in filming schedule dealt Anderson a significant blow when he lost regular collaborator Robert Elswit, the veteran cinematographer whose work on There Will Be Blood won him the Best Achievement in Cinematography Oscar. “Because of our change in schedule, Robert became unavailable due to another commitment,” says Sellar. “That was really hard for Paul and Robert.”

Anderson opted to work with relative newcomer Mihai Malaimare Jr on the recommendation of Francis Ford Coppola, who had made three films with the Romanian DoP: “Francis raved about Mihai,” says Sellar.

“When Paul met him they really got on. Because Mihai wasn’t that experienced, we surrounded him with a really top-notch camera and lighting team to support him. The result is great. Paul is also extremely involved in lighting, of course, too, and knows a lot about lenses and framing so his films are always beautifully put together.”

The decision was even more bold considering Anderson’s impromptu decision to shoot large sections of the film in 65mm, something that hadn’t been achieved on a similar scale since Kenneth Branagh’s Hamlet 11 years earlier.

“The film wasn’t originally conceived in 70mm [the print size],” he admits. “But we loved the look of those old VistaVision films like North By Northwest and Vertigo. While it is impractical, after testing it we saw that it looked and felt great for this story. It kept tumbling forward. We were worried at the time that there wouldn’t be many places to play the film in 70mm, but we were pleasantly surprised. There are still a lot of projectors, at least in the US, that are 35mm and 70mm combined.” In the UK, the film got a first run on 70mm at London’s Odeon West End.

Sellar remembers the unwieldy cameras being one of the film’s biggest challenges: “They kept breaking and made so much noise during the shoot [Anderson says he can still hear their irrepressible whirring on the final cut]. When we were away in San Francisco we had to fly the cameras back and forth to Panavision. There were times I wondered if we’d have to revert to 35mm but they always got fixed somehow.”

Production began in summer 2011, with The Weinstein Company coming on board just before the shoot to take US distribution rights and handle world sales. “He was great and gave some very good notes,” says Sellar of Harvey Weinstein’s support, before adding with a laugh: “Paul had final cut, of course, though.”

Even with production underway, the film continued to evolve: “I can’t even say for sure when we were making the film that the ‘love story’ [between Freddie and Lancaster] was the main focus,” says Anderson. “We pursued different ideas. There were characters in the script who became smaller as we went along. It didn’t have a real map. But Joaquin and Philip working together was the most exciting thing for me. There weren’t five other stories, it was always about their characters.”

The actors embraced Anderson’s spontaneity, with Phoenix especially open to the freedom, inventing mannerisms such as his character’s unusual posture: “He just started standing like that,” says Anderson. “I thought it was great. It was his idea. I think it comes from Joaquin spending a lot of his career trying to stand up straight. He’s incredibly inventive. You never know what he’s going to do. I would say: ‘Tell me the far left and right of what you might do.’”

Anderson, however, tempers reports that Phoenix spent three months solely in character: “The same thing happens with Daniel [Day-Lewis]. He creates the impression that he inhabits someone else 24 hours a day. The reality is that they have to interact with the here-and-now of acting in a movie and that there is an outside world. It would be more accurate to say that his concentration level was incredibly high. There were very few times you didn’t feel like you were around his character. There wasn’t a lot of stepping out of it.”

While the production was underway, the external speculation about the film’s content continued, with many predicting a controversial portrayal of Scientology and a backlash from the group’s powerful Hollywood community: “We’re living in an age when if someone gets a whiff of what you’re doing it gets speculated about more than anticipated,” says Anderson with a frown. “When you hear that chatter it can get mildly frustrating, but now people are seeing the film and realising it isn’t about Scientology.”

Sellar concurs: “We were aware of it, the speculation. The script was leaked a couple of years ago; we don’t know how. That was a real pain because people got the wrong end of the stick and labelled it the ‘Paul Thomas Anderson Scientology movie’. After that, I thought it was going to be a bigger deal than it was. I think people who had read the script and who really knew what we were doing didn’t think it was a problem. It wasn’t like we were being hounded by the Church of Scientology. It was mostly internet speculation.”

After its Venice premiere — where it won the Silver Lion for best director and a joint best actor award for Hoffman and Phoenix, but reportedly missed out on the Golden Lion for best film because of festival voting rules — The Master opened in the US on September 14, scoring the territory’s biggest-ever per-screen average, based on unadjusted figures, of $147,263. Nine weeks into its domestic run it had made $15.8m by November 18. It rolls out internationally in November.

Anderson and his producers are now working on his adaptation of Thomas Pynchon’s Los Angeles-set crime novel Inherent Vice: “I’m hoping we can get it going soon,” the director says. “That’s what I’m writing now. It’s a lot of fun. It’s such a different piece, though. It’s nice to have a collaborator, as it were, through working on the book.”

Would he be tempted to shoot in 65mm again? “It would be tempting to do it again. It’s a lovely format,” he says.

“I don’t think he’s made up his mind on the format,” cautions Sellar. “65mm is certainly being talked about but then the next day he talks about Super 16 and the next day about 35mm. He loves his test process. That usually determines it for him.”

The plan is to shoot in 2013, a surprisingly quick turnaround for a director who has taken 10 years to make his last two films. “I’m pushing him to be more productive,” Sellar jokes.

MAKING OF A MASTERPIECE