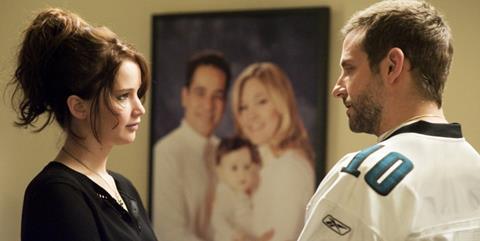 Unique, beguiling, and occasionally frustrating: These descriptions equally apply to Silver Linings Playbook and its two central characters, a bipolar man fresh out of an institution and a depressed woman reeling from her husband’s death. This romantic comedy-drama from director David O. Russell represents a merger of the two sides of his filmmaking personality — the freewheeling spirit of his early indies (Flirting With Disaster) and the more traditional crowd-pleasing tone of The Fighter — and even if the mixture doesn’t always gel perfectly, the brave, resonant performances from Bradley Cooper and a never-better Jennifer Lawrence go a long way to selling the movie’s bold beating heart.

Lovingly observing its characters and passing no judgments on their sporadically irritating behaviour, Silver Linings Playbook does eventually take a turn toward the conventional by having them train for a local dance competition.

Being released by the Weinstein Company in the US during Thanksgiving weekend, Silver Linings Playbook no doubt wants to make a play for award consideration. Strong reviews should help, and the presence of Cooper and Lawrence (not to mention Robert De Niro and, in a very small role, Chris Tucker) will attract box office, but the film’s decidedly quirky tenor probably guarantees only mid-range grosses.

Based on Matthew Quick’s 2008 novel, Silver Linings Playbook could be considered a very distant tonal cousin to Punch-Drunk Love, which similarly featured two outsiders — one suffering from clear mental and emotional problems — making a go at love. Pat (Cooper) has just spent several months in an institution for brutalizing his wife’s lover, but he’s convinced he can win her back, even though she’s moved on. Into his orbit comes Tiffany (Lawrence), a tart, combative young widow who has a reputation for being a slut since her husband has died. They become unlikely friends, spurred on by the fact that Tiffany still communicates with Pat’s wife, who has put a restraining order on him.

There’s nothing inherently fresh about a film featuring an imbalanced protagonist, but Silver Linings Playbook does good work normalizing Pat’s condition — so much so that the film’s herky-jerky tonal shifts seem to be related directly to Pat’s mood swings. (In this way, it also draws comparisons to Punch-Drunk Love.) Freed from the institution, Pat is determined to embrace a healthier, more positive outlook, and Cooper superbly reveals his character’s struggles to keep his façade of a fresh start intact.

As confident and empathetic as Cooper is, though, Silver Linings Playbook’s real revelation is Lawrence, who conveys a dangerous seductiveness as the thorny, vulnerable Tiffany. Though Tiffany’s problems may not be as extreme as Pat’s, she is equally wounded, and for the first time in her brief career Lawrence plays a grownup — as opposed to a self-possessed young person — with incredible flair and steeliness.

Lovingly observing its characters and passing no judgments on their sporadically irritating behaviour, Silver Linings Playbook does eventually take a turn toward the conventional by having them train for a local dance competition. Still, Russell daringly lets Pat and Tiffany follow their own rhythm wherever it may take the movie, which harks back to the unbridled looseness of his character-driven early work.

For all of Playbook’s oversized emotions and sensitive romantic development, late-reel complications — which include Pat’s superstitious, sports-obsessed father (De Niro) needing money to start a restaurant — derail the film’s momentum and shift focus away from Pat and Tiffany’s delicate bond. But much is redeemed by a finale that, although perhaps too pat, manages to arrive at a deeply satisfying conclusion that celebrates these characters’ enduring, endearing oddness.

Screenplay: David O. Russell, based on the novel by Matthew Quick