ACTOR: Joe Alwyn is “still computing” what has just happened to him 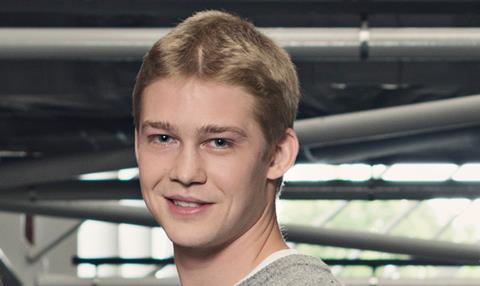 It’s unusual for an actor to land his first-ever screen role in an Ang Lee film, and it’s certainly exceptional that the part is in Billy Lynn’s Long Halftime Walk in which he’s playing Billy Lynn and appearing in every scene, opposite Kristen Stewart, Garrett Hedlund and Steve Martin, among others.

It was quite a well-publicised casting call as well, with Lee narrowing it down to four actors and eventually selecting the only one who had no film credit.

Back from the Atlanta and Morocco shoot, Alwyn quickly decompressed and signed up for BBC Films’ The Sense Of An Ending, which has just wrapped.

It’s been quite a year for Alwyn, during which the north London native also graduated from the Royal Central School of Speech & Drama (having studied English and drama at Bristol University) and turned 24.

“It all happened so quickly,” he recalls. “I still didn’t have an agent when I did my showcase. I signed on a Monday, self-taped on a Thursday and by Friday I was in New York meeting Ang Lee.”

The Oscar-winning film-maker and the London newbie became close. “He’s a very special person,” says Alwyn. “Billy is there in every scene in the movie, so I was on set first thing in the morning, last thing at night, working very closely with him. I felt very strange leaving it and leaving him.”

Billy Lynn’s Long Halftime Walk, based on the lauded book by Billy Fountain in which a serviceman counts down the hours before his return to Iraq, is set for a November 2016 release.