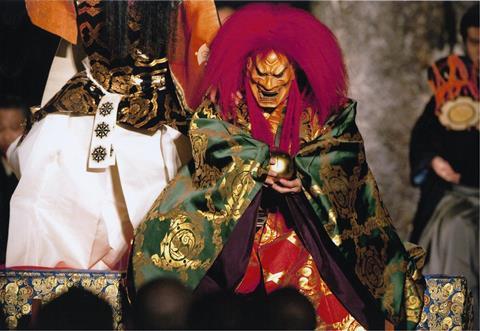 Though cumbersomely staged and less than absorbingly structured, at the heart of Chiseko’s Successful Tradition Of Noh is a fascinating glimpse into the world of the Japanese classical musical theatre Noh (or Nogaku), which has been performed in unaltered style for some 700 years.

Where the film does show some verve is in the rehearsals between three generations of the Sekine family.

The film features extracts from stage performances of Shari, Dojoji and Matsukaze, interlinked with a discussion between actor Shiro Sano, folk lore expert Hideki Tanaka and Noh performer Yoshito Sekine. Also interspersed – for no useful reason – are fictional scenes of two actors (one older and one younger) arriving at the elegant Kanze Noh school.

The scenes of the threeway discussion look like they could have been shot in the mid-1970s, and are unimaginatively staged and rarely interesting. Where the film does show some verve is in the rehearsals between three generations of the Sekine family, as Yoshito Sekine works with his father Shoroku Sekine and his son Yoshimaru Sekine.

Noh has been performed since the 14th century, and is extremely codified and mannered, with many characters masked and men playing both male and female roles.