Survival Of The Dead 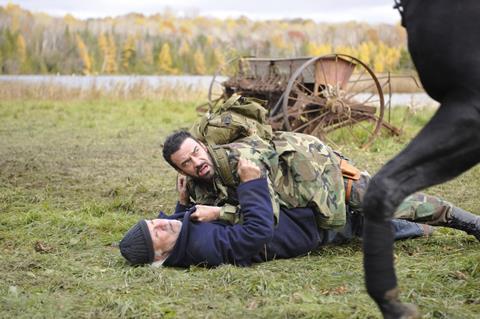 The living dead seem as bored of the zombie genre as their victims in George A. Romero’s latest addition to his Dead franchise. There’s a decent gore quotient, some fairly amusing zombie-slaying variations, and a sassy verve to the narration particularly in the first part of the film. But Romero’s franchise has always drawn its strength from the subversive social comment that lies beneath the conventional horror surface – and here, for the first time, it really feels as if the zombiemeister is runningout of interesting ways for flesh-eating hordes and bowel spaghetti to tell us about the world in which we live.

The last film in the series, Diary of the Dead, barely made a dent on international and domestic box office charts, and although it’s a low-cost exercise with high margins, Survival of the Dead may not even pass muster under those parameters.

It would seem to make the point that the zombie mantle has passed to ‘us-and-them’ sci-fi films with a political message – District 9, for example, or 28 Days Later. Romero’s name carries a cachet, however, and the director’s fan-base will still turn out dutifully, with DVD sales and rentals making good.

Unlike Land of the Dead – set several years after the dead first began to rise up and eat the living – Survival opens a few days after the outbreak. As chaos mounts and social order breaks down, an army unit led by Sarge (Van Sprang) deserts.

Meanwhile, on Plum island, somewhere off the coast of Delaware, two rival Irish clans, the O’Flynns and the Muldoons, fight over how to deal with the living dead, with clan chief Seamus Muldoon (Fitzpatrick) finally imposing his assertion that it’s better to keep them chained up until a cure can be found. Patrick O’Flynn (Welsh), the cull-inclined rival boss, is exiled to the mainland, leaving his daughter Janet (Munroe) behind.

An internet scam brings O’Flynn and the loose-cannon band of commandos (who have since picked up a teenager played by Bostick with a knack for gunplay) into an uneasy alliance. When they land on the island, where the zombies are now penned in sheds like cattle, the scene appears to be set for a Yojimbo/Fistful of Dollars showdown in which the mercenaries play the clans off against one another.

But the script opts for convoluted action over clean dramatic lines, and finally ties itself in the kind of knots that the stand-off ending is unable to untie. Survival even resorts to that most hackneyed device – an identical twin, thrown in from nowhere at the midway point.

The flesh-chomping special effects are up to Romero’s usual standard, and the film adds one or two entertaining new entries to the how-to-kill-a-zombie manual. But despite its nicely grim sense of humour and some decent performances by the mostly Canadian cast, Survival of the Dead is, like its zombie chorus, glassy-eyed and stumbling. More relevantly for nonsense-tolerant horror fans, it’s not even particularly frightening.