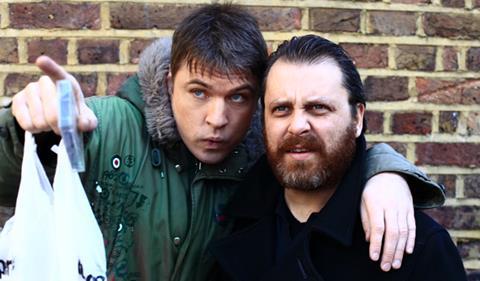 Cult online series Svengali makes an ill-advised upgrade to the big screen in this feeble, feel good British comedy feature.  Determined to tickle the funny bone and tug at the heartstrings it doesn’t succeed at either and often feels like a pale imitation of the films that established Shane Meadows reputation in the 1990s.

There is no credibility, rhyme or reason to Svengali which requires the audience to take blind leaps of faith.

Writer, co-producer and star Jonny Owen makes an engaging enough leading man, but the perky, comic antics feels stale and the creaky plot is heavily reliant on contrivance, coincidence and cliché. The show’s online fan base could create a potential theatrical audience for the film but it is unlikely to make any new converts.

Owen plays Dixie, a gormless Welsh postman who heads to London with his girlfriend Shell (Vicky McClure). His dream is to manage a rock band and in the twinkling of an eye he has discovered The Premature Congratulations. On the basis of one disastrous gig, the band is inexplicably hailed as the next big thing.

Dixie’s attempts to manage their overnight success are juggled with fending off debt collectors, popping back to Wales to visit his dying dad and convincing Shell that he loves only her.

There is no credibility, rhyme or reason to Svengali which requires the audience to take blind leaps of faith. Jokes about the Welsh being lovers of sheep and Bono being off in the jungles with Sting fall flat and after a bouncy, jaunty start it soon wears out its welcome.

Music manager Alan McKee and Martin Freeman (as a record store owner) are among the many name cameos woven throughout the film, but in general the supporting characters are caricatures and the performances are wildly overstated.