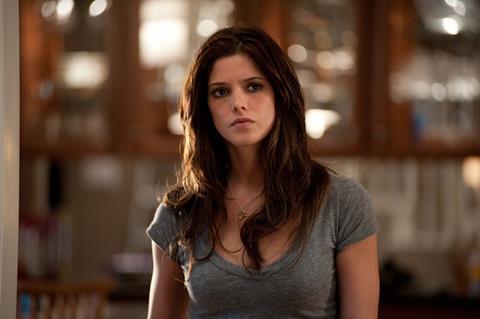 A thinly sketched paranormal thriller, The Apparition arrives in theaters stripped almost bare of anything that might provide some color, complication or personality. Even aiming for spookiness more than horror, writer-director Todd Lincoln’s feature debut is a desultory misfire.

Greene proves extraordinarily photogenic. And even though he’s burdened with voiceover narration that explains the movie’s spirit-world stalker in nonsensical omniscient fashion, Felton certainly gets to showcase a side different than that of Draco from the Harry Potter films.

Getting a one-week jump on similarly titled fellow genre entry The Possession may give The Apparition a leg up on audience confusion over the two. And some of the Twilight fanbase may turn out for Ashley Greene’s debut as a studio leading lady. But the absence of a stronger narrative hook will dent the movie’s performance, as will less than glowing word-of-mouth and critical response. Meager theatrical earnings should be offset a bit by cable and VOD platforms, where The Apparition will see most of its business.

Set in the Los Angeles valley exurb of Palmdale, the story centers around a young couple, Kelly (Greene) and Ben (Sebastian Stan, pantomiming brooding intensity), who live in a house owned by Kelly’s parents.

A period piece cold open within another discrete opening sequence shows a pair of university parapsychology experiments gone awry, and after strange things start happening in Ben and Kelly’s new abode, it’s revealed that Ben has a connection to some of the aforementioned research. After Ben tries and fails to shake him and Kelly free of a mysterious apparition with increasingly malevolent intentions, his friend Patrick (Tom Felton) shows up to aid in their panicked efforts.

While it doesn’t center on a single house that’s haunted and doesn’t tell its story via a found-footage conceit, The Apparition nevertheless tracks closely in tone to movies like Insidious and the Paranormal Activity franchise, though it lacks those films’ visual cleverness and narrative nimbleness. Much is implied rather than shown outright, and a superlative sound design helps wring a modicum of tension from otherwise poorly constructed scenes.

Lincoln’s screenplay is riddled with dubious decisions on the part of its characters (after an early massive freak-out in their home, Ben and Kelly camp out… in the backyard), and its science is spurious and poorly explained even by the lax standards of genre filmmaking aimed at a more gullible demographic.

Even more problematically, however, the script does nothing of much substance in regards to Ben and Patrick’s shared past. And, trying desperately to locate some extra drama, The Apparition indulges the manifestation of wild anger on Kelly’s part before she even knows any of the specific details of Ben’s connection to the past experiment. Contrived gambits like this drive the action of the story rather than resulting from any organic discovery or investigation.

Lincoln’s decision to shoot in anamorphic 2.35:1 on 35mm rather than digital lends the movie some differentiation from many of its low-end-budget peers, but the work of cinematographer Daniel Pearl — who shot the original The Texas Chainsaw Massacre and delivered dense, moody and evocative work on the remakes of both that movie and Friday the 13th — overall feels handcuffed, and unable to summon sustained dread. Darker interiors, built on sets at Babelsberg Studio in Berlin, seem out of step with the sunnier, more open vibe of movie’s exteriors, lensed in Southern California.

Greene proves extraordinarily photogenic. And even though he’s burdened with voiceover narration that explains the movie’s spirit-world stalker in nonsensical omniscient fashion, Felton certainly gets to showcase a side different than that of Draco from the Harry Potter films. But this uninspired, programmatic genre entry affords no opportunity for showcase performances, only a chance for quiet acquittal.