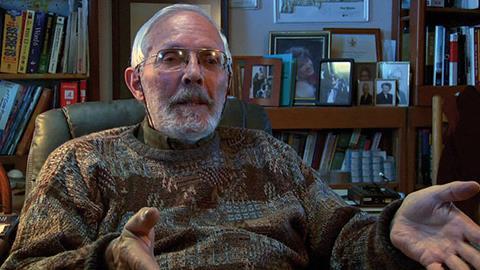 A (dare one say it?) energetic look at the initial euphoria and rocky fallout from the 23 March 1989 announcement that two University of Utah scientists had achieved cold fusion, The Believers is an informative introduction to often-contradictory assertions, as well as a cautionary tale about the downside of fame when what you’re famous for is something that upsets the established order. Chemists vs physicists turns out to be pretty entertaining stuff and the elusive prospect of cheap, clean, limitless energy is an excellent hook in both life and filmmaking.

The filmmakers leave viewers to draw their own conclusions, but there’s much here to pique the interest of any layman.

World-premiering at the Chicago Int’l Film Festival, this modest but effective and bittersweet doc is a fine candidate for additional festival play and would seem to have great potential as a conversation-starter on TV, in classrooms and wherever people gather who hold out hope that there really is a way to power our world that doesn’t involve further poisoning it in the process.

The doc begins with James Martinez, a California DJ who broadcasts on internet-based Cold Fusion Now Radio. While enthusiastic, he has nothing of the bug-eyed loony about him when making pronouncements such as “This is the key to liberating the human race.”

Dr. Martin Fleischmann and Dr. Stanley Pons were prominent and respected electrochemists when they went public with their findings prior to the customary peer review, a move they lived to regret. At the 1989 press conference in Utah, Fleischmann held the glass vial in which he maintained he and Pons had hit on proof that “more energy is coming out than is going in” and did so at room temperature without massive equipment.

“America is a hard taskmaster — I learned that,” says Fleischmann for documakers Monica Long Ross and Clayton Brown, twenty years later. The mainstream media ran with the story at first. “Instead of splitting atoms, fusing atoms,” said national news anchor Dan Rather on CBS. “Sea water could replace coal, oil and uranium,” elaborates their reporter.

But within three months, cold fusion had gone from humanity’s hope for cheap, plentiful, non-polluting energy to, as one commenter puts it, “a pseudonym for junk science.”  When their results proved difficult to reproduce by others, Fleischmann and Pons found their reputations in tatters, their families in danger. (Whether the advances were real or not, the traditional fuel and energy establishment did not appreciate the prospect of readily available and endless energy for all. Wife Sheila Fleischmann recounts full-time bodyguards to make sure they didn’t “get kidnapped and held to ransom.”)

What went wrong? Although Fleischmann and Pons had paid for the research out of their own pockets, the experiments were conducted at the University of Utah. Another cold fusion researcher at rival Brigham Young University was rumoured to be close to his own breakthrough.

Suddenly lawyers and patent attorneys were part of the public relations equation and Fleischmann and Pons were not free to give too many specifics about how they’d achieved their earth-shaking discovery.

Without all the nuances of the recipe, others failed to replicate the results — and reproducibility is a cornerstone of science.It had the potential to solve all the world’s problems and became little more than an endless source of problems for the two researchers. By the middle of June it was all over. A New York Times editorial called it “The Utah fusion circus.”

Interviewees - including Martin Fleischmann himself who died, age 85 on August 3 of this year - are eloquent and convincing on both sides of the fence. (Electrochemist Pons, who, like Fleischmann, left the US after their alleged breakthrough lost credence, declined to be interviewed for the film.)

But, as the title suggests, the doc gives screen time to the mostly-aging scientists who still believe the results can be replicated. Joining their ranks is an obviously bright15-year-old boy who sends away for a do-it-yourself home cold fusion kit after his teacher can tell him nothing about cold fusion.

Former vascular surgeon and true believer Irving Dardik, using what he calls “superwaves,” appears to improve then- 83year-old Fleischmann’s condition from Parkinson’s Disease to the point that he can attend a cold fusion conference in Rome.

Contemporary and period footage is smartly cut together with archival documents framed in a square with rounded corners echoing the shape of an early TV screen or lab monitor. Keanu Reeves in a 1996 movie, an Outer Limits episode, a 2009 Torchwood episode from the BBC and footage of Elisabeth Shue in The Saint demonstrate that cold fusion had gone from a possibly viable scientific procedure to the silly stuff screenwriters use.

Either there’s some delicate variable or the chemists were mistaken. A man who was a grad student in Fleischmann and Pons’ department at the time says “I will defend them at every turn. What we did was real.”

The filmmakers leave viewers to draw their own conclusions, but there’s much here to pique the interest of any layman.