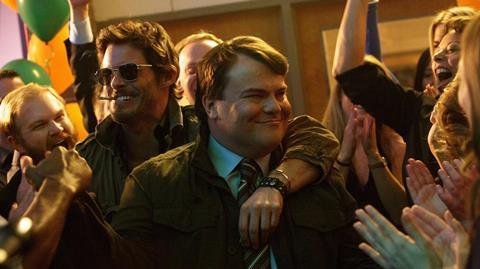 A very silly movie with a sneaky smart streak, The D Train examines how that high school need to be accepted never leaves you — although the film would much rather make its point through laughs than straight-faced sincerity. The feature debut of writer-directors Andrew Mogel and Jarrad Paul, this umpteenth film about a class reunion cuts a little deeper and gets a little edgier than its peers, finding plenty of humour and a surprising amount of chemistry by pairing Jack Black and James Marsden.

While The D Train is properly labelled a reunion movie, Mogel and Paul find ways to freshen up that genre a little.

Screening at Sundance as part of the festival’s US Dramatic Competition, The D Train has been picked up by IFC, which plans to release this comedy later in the year. Black and Marsden are potent selling points, as will be audiences’ nostalgia for (or horror about) their own high school reunion. With the film presumably getting an R rating because of its language and sexual content, IFC will probably target adult audiences, playing up the movie’s more out-there qualities.

Black stars as Dan, an insecure busybody who’s taking way too much pleasure in being his hometown’s high school reunion coordinator. Disappointed at the small amount of RSVPs collected thus far, he decides to fly from Pittsburgh to Los Angeles to court Oliver Lawless (Marsden), his graduating class’s coolest student who has now found success in Hollywood in a national television commercial. Dan figures if he can convince Oliver to come home for the reunion, the night will be a success — and he’ll be the big hero.

That ridiculous scheme ends up working out much better than planned, but the results aren’t exactly what Dan expected. To spoil The D Train’s central twist wouldn’t be any fun, but let it be said that the two men’s night out in Los Angeles gets far more intimate than either was initially planning. Although Dan and Oliver couldn’t be more different — Oliver remains much cooler than dopey, trying-too-hard Dan — they’re able to bond over, well, Dan’s infatuation with Oliver. Impressed that Oliver got out of Pittsburgh and made a name for himself, Dan nevertheless manages to appeal to Oliver’s vanity, promising him that everyone back home would be so thrilled to see him at the reunion. Oliver may be cooler than Dan, but even he is susceptible to a good ego stroke.

Mogel and Paul may not be particularly sophisticated filmmakers, but they keep The D Train running smoothly, focusing on the odd-couple interactions between Dan and Oliver. On paper, these characters should be incompatible partners, but Black and Marsden’s rapport is endlessly entertaining, believably finding common ground between Dan and Oliver. (And when things go in an unexpected way on their night in L.A., the two stars play the scenes with an impressive amount of realism, which only makes the surprise — and the laughs — more enjoyable.)

Unfortunately, Black can be a little too broad at times, exaggerating Dan’s pathetic attempts to seem hip to such a degree that the character is no longer funny but, rather, just obnoxious. More consistently engaging is Marsden. Probably best known for his role as Cyclops in the original X-Men movies, he can be quite funny in comedies like Enchanted in which he sends up his movie-star looks. In The D Train, his Oliver is a cocky hunk who doesn’t really have the credentials to back up his swagger. (His TV commercial, as he himself acknowledges, is pretty lame, and his acting career hasn’t amounted to much.) Consequently, the character has a sweet vulnerability, although he does his damnedest to mask it with Hollywood posturing.

The filmmakers have assembled a crack ensemble around their two leads to keep the laughs coming from several different sides. Veteran supporting player Kathryn Hahn is just right as Dan’s long-suffering wife, and Jeffrey Tambor brings sufficient pathos and humour to the role of Dan’s boss, who gets suckered into Dan’s L.A. scheme in one of the movie’s strongest set pieces.

Playing with notions of celebrity, sexuality and identity, The D Train will do anything for a bit — the phrase “lawn chairs” will have a new meaning after seeing this film — but it generates its comedy from the nagging hang-ups we cultivate as kids, which keep playing out in embarrassing ways as adults. And while The D Train is properly labelled a reunion movie, Mogel and Paul find ways to freshen up that genre a little. More accurately, this is a buddy movie about two guys who aren’t really buddies — except one of them, poor bastard, doesn’t realise it.