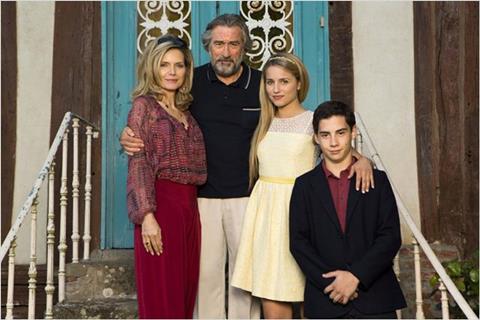 Robert De Niro, Michelle Pfeiffer and Tommy Lee Jones struggle to find the laughs in The Family, a messy and tonally wobbly English-language comedy directed and co-written by one-man European studio Luc Besson. The marquee names, a Franco-American culture-clash theme and a few trailer-worthy moments will provide marketing hooks on both sides of the Atlantic, but initial audience interest in this darkish romp seems likely to fade fast.

The American characters’ violent outbursts - aimed at their snooty new neighbours - provide a few dark chuckles, but the dialogue is surprisingly flat.

As the first of two projects under its co-production deal with Besson’s EuropaCorp, Relativity will open the R-rated film wide in the US on September 13, with the baby boomer audience probably offering the best chance of a decent box office start. The material’s French-Italian literary pedigree might give international distributors - Relativity’s output partners or indies that have licensed from Europa - a little extra leverage.

Besson - who lately has had more success as writer-producer on the Taken and Transporter franchises than as a director - worked with American writer Michael Caleo (The Sopranos) to adapt Tonino Benacquista’s popular French-language novel Malavita.

De Niro plays turncoat Mafia boss Giovanni Manzoni, who, under the Witness Protection Program, is relocated to a sleepy French town with his feisty wife (Pfeiffer), attractive daughter (Dianna Agron, from Glee and I Am Number Four) and scrappy son (The Wrestler’s John D’Leo). Watching over the family is a world-weary FBI man (Jones) and his team.

Alternating between the adults’ encounters with the locals and the kids’ experiences at school, the film plays on French and American stereotypes and throws in some mildly funny scenes between De Niro and Jones. Touches of intrigue come from Giovanni’s plan to write a tell-all memoir and a sub-plot that has his old mob colleagues try to track him down.

The American characters’ violent outbursts - aimed at their snooty new neighbours - provide a few dark chuckles, but the dialogue is surprisingly flat. And Besson never finds a tone that really works, flitting from dark comedy to lightweight romance to unconvincing drama.