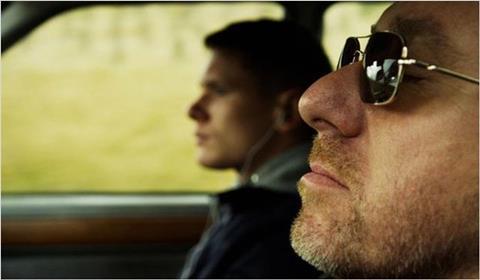 Camera operator turned director Craig Viveiros continues to show promise with his second feature after the prison drama Ghosted. Low-budget road movie The Liability brings a laconic English sensibility to a Tarantino-style set-up, and there are hints of the Coen brothers and strong undercurrents of Harold Pinter in John Wrathall’s darkly comic screenplay while a talented cast ensures that it remains entertaining and endearing even as the plot veers off the rails.

There is a sweet heart to the wayward tale in the relationship that develops between the naive, excitable O’Connell and the more jaded, laidback Roth.

Metrodome are set to release theatrically in the UK in May, which should serve as a shop window for greater returns in ancillary.

A convincingly unhinged Peter Mullan makes the most of his few, juicy scenes as volatile criminal Peter. Exasperated by his girlfriend’s gormless teenage son Adam (Jack O’Connell), he bullies the lad into serving as a driver for weary, cigar-loving assassin Roy (Tim Roth). A seemingly simple job becomes overly complicated when the duo are caught in the woods chopping up a body.

A quirky, chalk and cheese buddy film steps up a gear with a chase, a showdown, revelations of sex trafficking and a journey through a world in which gunshots and abduction never seem to attract the attention of the police.

The lurch from blood-spattered violence to black comedy and elements of father/son bonding creates an inconsistent tone to the film, but Viveiros makes atmospheric use of unfamiliar

Northumbrian locations and there is a sweet heart to the wayward tale in the relationship that develops between the naive, excitable O’Connell and the more jaded, laidback Roth. The fact that it carries echoes of a similar chemistry between the young Roth and John Hurt in The Hit thirty years ago will only enhance the film buff appeal of The Liability.