'The Lost City Of Z' to close NYFF

James Gray’s adventure has been a long time coming but audiences will finally get a chance to see it as the closing night world premiere screening at the 54th New York Film Festival on October 15. 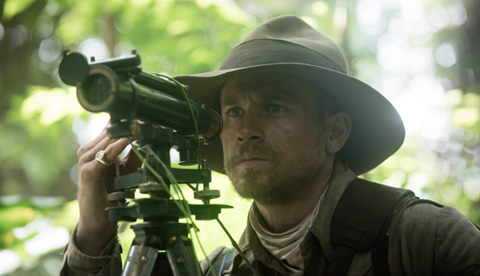 The Lost City Of Z is based on journalist David Grann’s non-fiction book of the same name and stars Charlie Hunnam as Lieutenant Colonel Percy Fawcett, a British explorer whose search for a lost city deep in the Amazon becomes an obsession.

Sienna Miller stars as Fawcett’s wife, while the key cast includes Robert Pattinson and Tom Holland, who plays the new Spider-Man for Marvel Studios and Sony.

“James Gray is one of the finest filmmakers we have,” said New York Film Festival director and selection committee chair Kent Jones.

“Each of his movies is so beautifully wrought, visually and emotionally, but The Lost City Of Z represents something new. It’s a true epic, spanning two continents and three decades, and it’s a genuine vision of the search for sublimity.”

“It’s truly a dream come true for me to have The Lost City Of Z selected for the closing night of the New York Film Festival,” said Gray. “I couldn’t be more honored that the film’s world premiere will be in my hometown, a city I still love above all others.”

Gray’s previous film The Immigrant was an official selection of the 51st New York Film Festival.

Dede Gardner, Jeremy Kleiner, Anthony Katagas, and Dale Armin Johnson produce The Lost City Of Z. Brad Pitt, who was previously attached to star in the film before that iteration fell apart years ago, serves as executive producer alongside Marc Butan.

As previously announced, Ava DuVernay’s documentary The 13th will open the festival and Mike Mills’s 20th Century Women is the Centerpiece. NYFF runs from September 30-October 16.