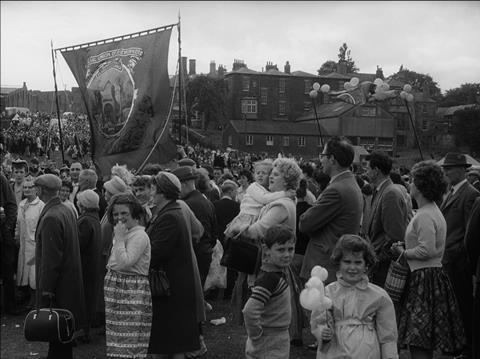 Unless used as brief inserts, archival footage is generally deployed in films to convey information, the visual component of a more or less linear historical narrative. The leader of the pack these days is Ken Burns, and countless television and film documentarians assemble in a similar content-oriented manner. Morrison does not assemble, nor does he go directly from point A to point B. He manipulates images, enhancing mood and scoring progressive political points through his juxtapositions. The Burnsians are gifted artisans; Morrison goes further: He is an unapologetic poet, a unique talent.

Best known for his 2002 Decasia, composed of decayed stock, he does not disappoint with this beguiling film. Yes, he uses step-printing and slow motion, technical gimmicks, if you will, but never gratuitously. They contribute to the rhythm of the whole but also help to redefine something that has only been seen or experienced in “real” time, enhancing their impact.

At a less than one-hour running time, and without dialogue (the American filmmaker edited from a rich, affecting brass score by Icelandic composer Johannsson), and constructed almost totally from black-and-white footage, the film does not have a lot of conventional commercial potential, with the possible exceptions of well thought-out home-video campaigns (the British Film Institute releases it on DVD June 20, and will supplement it with earlier works by Morrison later on), and museums and highly specialised cinemas willing to carefully program it on a double bill and target the right audience. I mention museums in particular because The Miners’ Hymns is unpretentious high art, an anomaly that makes perfect sense in this context.

For the subject here, from an idea by David Metcalfe, are the coal miners of northeast England, in Durham, where the working-class had clout, and the now camouflaged coal mines that provided sustenance for the men’s families and a cultural and moral identity that extended far beyond the workplace. The recurring annual celebration of their organisations is pure pageantry, replete with parades and the requisite brass bands. (The film was commissioned for the 2010 BRASS Durham International Festival.)

Lest one get lost in such charming spectacle, Morrison regularly cuts to the dark, dank interiors of the mines, their Metropolis-like labour conditions, the netherworld the miners inhabited for half of each working day. Much of the footage is nearly a century old, many of the mines having been operational from the 19th century. Sequences from the 1984 strike, during the Thatcher era, recall the death knell of their trade and lifestyle: the bussing in of scabs, the police enforcing for the owners.

Wisely, Morrison flew with Desbrow last year over the (literally) colourful locations, which they filmed to compensate for their eradication from the history books, their fairly recent conversion to malls and sports clubs serving higher classes. Text identifies the names and dates of operation of these various collieries, correcting the record while the sounds and images seduce the viewer.