As Ponyo hits US theatres, Japanese animation legend Hayao Miyazaki arrived in Los Angeles for a rare promotional trip. He spoke to Mike Goodridge about the Miyazaki process and his passion for hand-drawn animation 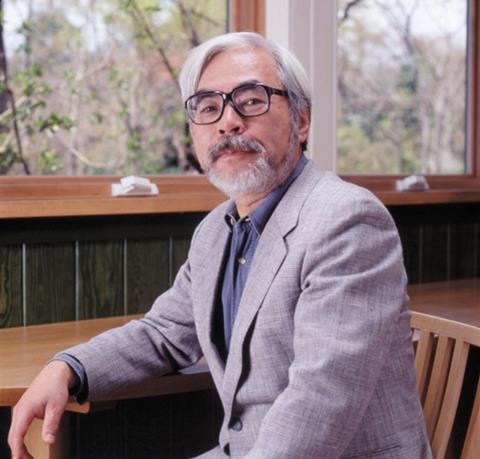 Hayao Miyazaki looks bemused in the middle of the Disney press junket late last month for his latest film Ponyo, released in Japan in 2008 as Ponyo On The Cliff By The Sea. Surrounded by a phalanx of studio publicists and
camera crews in a Beverly Hills hotel, he is the undoubted star of the day even while US actors who voiced the Disney English dub such as Noah Cyrus and Cloris Leachman sit being interviewed in other rooms.

“I can’t even use a computer. I think Pixar do a wonderful job with computer animation so we don’t feel we need to go into that area”

A kindly looking man with distinguished white hair and beard looking dapper in a cream suit, the 68 year old rarely leaves Japan on publicity tours and, sitting down with me and his expert translator, he laughs that he is only here at the persistent urging of John Lasseter, an old friend who is now running creative matters at both Pixar Animation
Studios and Walt Disney Animation Studios, the latter of which oversaw the US dub of Ponyo.

“John Lasseter brought me here,” he smiles. “I went to Comic-Con in San Diego and I was also invited to John’s new home in northern California to see it. So much has happened in a short space of time that my mind is dizzy
with the intensity. I don’t do too much travel with the films. It’s too much to travel.”

But Miyazaki’s trip to the US for Ponyo is particularly significant for Lasseter who, in his new role as creative head of all Disney animation, is determined to cross Miyazaki’s unique vision over to a wide family audience.

Lasseter has revered Miyazaki’s films and manga for decades and he has made it a priority to translate the 12-year relationship between Disney and Miyazaki’s Studio Ghibli into a US success story -finally. Miyazaki’s two
previous films, Spirited Away and Howl’s Moving Castle, may have had critics raving but they grossed just $10m and $4.8m respectively in Disney dubs in the US.

This time, with Lasseter’s blessing, Miyazaki’s Studio Ghibli enlisted Hollywood uber-producers Kathleen Kennedy and Frank Marshall to work with Disney on the US version which also features Matt Damon, Cate Blanchett and
Liam Neeson in key voice roles. It is almost a point of honour for Lasseter to make Ponyo work.

Miyazaki himself appears less concerned. “I didn’t get involved in the US version,” he explains. “I left it up to John, Kathleen and Frank. I trust them completely. I have only seen fragments of the film but I think they’ve done a wonderful job.

“I believe the way it was scripted in English is more understandable for an American audience and rings true for them. I never insisted it should be word for word. In Japan we have read things from America in translation for
years and so we know an interpretive translation is often the best way to go.”

Of course, an English version is only of significance to English-speaking territories, and the film has already opened in Italy (after its Venice 2008 premiere), France, Spain, Benelux and other markets. Madman will open the
Disney version in Australia and New Zealand next month and Optimum in the UK early next year.

As they have for the last few Miyazaki features, Paris-based Wild Bunch handles international sales outside the Disney territories and certain markets handled directly by Studio Ghibli. “I try to work with [Wild Bunch]
as much as possible,” he says. “They are a wonderful group of people and do a great job.”

Ghibli may be flexible when it comes to translating the dialogue but it has a strict policy forbidding distributors to edit the film itself, which originated when Miyazaki’s 1984 classic Nausicaa Of The Valley Of The Wind was dramatically recut for US release as Warriors Of The Wind. Indeed when Harvey Weinstein suggested cuts to Princess Mononoke for Miramax’s 1999 US release, he was given a categorical no.

For all the focus on the international release, Miyazaki’s first priority is his Japanese audience which shows up to his films with nothing short of devotion. Ponyo opened last July in Japan and took $153m; Howl’s Moving
Castle took $186m in 2004 and Japan’s all-time box-office champ Spirited Away grossed a stunning $286m in 2001.

“I think it’s important for our films to be shown around the world, but initially we are concerned about how the Japanese audience will receive the films,” he says. “We don’t make them with an awareness of an international
audience. Then again, I don’t really think of Japan or the world when I’m making them. I think they are more Ghibli than any particular nationality.

“The only concession I make is to the lifestyle and customs I am depicting. For example, how people meet and greet each other, how they open a door, that sort of thing. If the setting is Japan, I make sure it’s done in
Japanese style and if the setting is somewhere in Europe, I try to make sure it seems like a person in a European country would think it was normal.”

Miyazaki is keen to stress that, for all his influence at Ghibli, the company he co-founded in 1985, he is not as much a businessman as John Lasseter. “I’m just a director,” he says. “They do things at Ghibli I don’t know about. I’m always surprised that they are doing this or that. And I don’t intend or want to control everything at Ghibli either. I just want to be responsible for the films I direct.”

Nor does he plan to move anytime soon into computer animation, a la Pixar. “The reason we stress drawing with pencils is that I like to draw with my pencil,” he says. “I can’t even use a computer. I think Pixar do a wonderful
job with computer animation so we don’t feel we need to go into that area.”

And Nick Park in the UK does a wonderful job with clay animation. So we don’t need to go there either. We’re always training young artists, directors and animators at Studio Ghibli but we all agree that we will
continue to draw animation with our pencils.”

He says he has not seen all the features in the Pixar canon, and, of the ones he has seen, he likes some more than others. “The thing I like about Pixar is that you can really tell John Lasseter is putting all his efforts
into the film and it is his spirit that I really recognise and commend.

We have also been in positions where people have tried to sway our vision so I understand what he has to go through.”

Ghibli will release Kerou’s Rebellion, the latest film from Miyazaki’s mentor and Ghibli co-founder Isao Takahata, next summer and Miyazaki’s son Goro is currently preparing his next feature after Tales From Earthsea.

So what is next from the master himself? “I’m just drawing some manga as a hobby at the moment,” he says. “There are a few vague thoughts in my mind but whether they become concrete or not is unclear. I have about one more year to worry about what to do. And I have done a lot to make sure I have that time to think of the next project.”

He describes his process of coming up with ideas as “trying to scoop up with a net from the sea of my own imagination and thoughts. One day a little goldfish called Ponyo happened to catch in my net. I think that’s the most exact way I can describe how the idea comes to me.

And then to make that idea a reality, I start thinking hard and drawing storyboards or image boards. And then with the three main staff who work on the background art and the characters and animation, we start working on it together. And then, as I draw the storyboard, even before the complete story is finished, the animators start doing the animation cells.”

It is obviously the process which Miyazaki relishes, much more than the junkets, the premieres and the garlands.
“When I finish a film and people see it, I become poor,” he says, with a smile. “So now I’m at the stage where I’m poor inside myself. Now I have to get out my net and start scooping up some new ideas.”