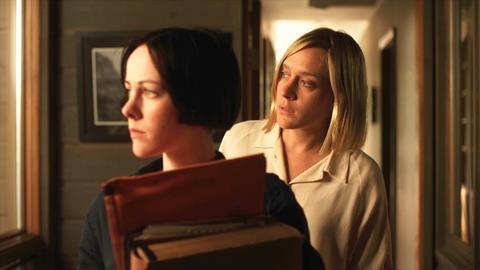 Metaphor and opacity get a workout in The Wait, an inscrutable drama of commingled supernatural and psychological elements, starring Chloë Sevigny and Jena Malone as at-odds sisters coping with the death of their mother. Writer-director M. Blash marshals considerable atmospheric forces, but his film collapses under the weight of oblique logic and plotting, lacking in either effective emotional payoff or the more skilled observational touch of a rumination on loss.

The Wait leaves viewers poised on a precipice, waiting for a revelation or catharsis that never comes.

Receiving a modest theatrical release, The Wait will make its play for arthouse audiences — with whom Malone, costar Josh Hamilton and in particular Sevigny still have currency — mostly via targeted ancillary markets. Given lukewarm critical response, distributor Monterey Media will have to find satisfaction with curio value.

The Wait unfolds in present-day rural Oregon, as a wildfire rages in the distant mountain ranges. As her bedridden mother slips away, hospice caregiver Emma (Sevigny) receives a mysterious phone call confirming her astrological sign and offering vague predictive statements that Emma take to mean her mother will be resurrected. Emma’s sister Angela (Malone) regards this as nonsense, but is thwarted in her attempts to procure a death certificate (the office has moved), which Emma takes as yet another sign that their mother’s body should not be moved.

Meanwhile, after Emma’s daughter Karen (Lana Green) briefly crosses paths with a strange young man, Ben (Luke Grimes), Angela gets to know him better. After a night of drinking with Ben, Angela begins to believe Emma’s theory of restoration, and wonders if there may be a connection between her mother’s state and the nearby fire.

On a technical level, The Wait represents a big step up for Blash from his 2006 film Lying, in which Malone and Sevigny also appeared. Cinematographer Kasper Tuxen delivers consistently evocative compositions, and Blash and sound designer Mark Henry Phillips wring intrigue out of the juxtaposition of silences and open settings.

Unfortunately, Blash’s screenplay — most likely an outline from which improvisation was encouraged, if keeping with his past works — doesn’t cohere into something meaningful. In passages, there’s a sense of slipstream, impending, just-out-of-frame eruption, and the best portions of The Wait recall the vaguely unnerving tone of work from contemporary young filmmakers like Sean Durkin, Antonio Campos, Zal Batmanglij and Mike Cahill.

Blash, however, is allergic to both plot proper and even substantive character study. His scenes are littered with the sort of gaps in dialogue response that come across as artificially portentous, and the movie’s flirtation with unresolved family issues is short-lived. A narrative strand following young Ian (Devon Gearhart), and his interaction with his friend’s father (Hamilton), trails off into nothingness. And the arrival from out of town of Emma’s husband Henry (Henry Gummer), which could imprint a modicum of reactive vigor upon proceedings, similarly dissipates. There’s not enough action here, be it from outside forces or the main characters themselves.

The Wait has an eclectic music palate. Owen Pallett’s score variously tries on Bernard Herrmann’s dissonance, foggy electronic burbling and a low throb of menace. (The Cure’s “Sugar Girl” also makes a notable appearance.) It’s an approach which helps create several pockets of discrete mood, but doesn’t do much to convincingly impart a sense of the sum of the film being masterfully orchestrated, and greater than the whole of its parts.

Blach’s actors labour to invent meaning wholesale, and Sevigny and especially Malone have some success in this regard — the latter most notably in a scene of drunken carousing with Grimes, and another striking sequence in which she seemingly rages against infidelity and mourns the loss of a relationship. The Wait, though, leaves viewers poised on a precipice, waiting for a revelation or catharsis that never comes.