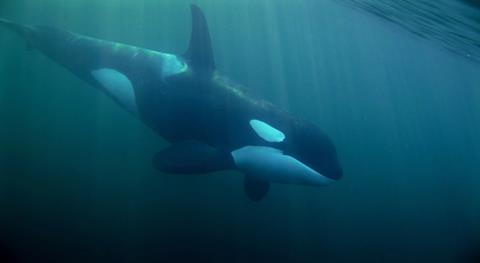 Modest but emotionally engaging, the documentary The Whale tells the story of a baby male orca who got separated from the rest of his family and found himself marooned off the west coast of Canada. Narrated by Ryan Reynolds, the film sometimes overplays its touchy-feely sentiments rather than sticking to the strength of its story, but nature lovers and animal activists will find much that speaks to them in this slender, resonant tale.

The Whale oversells its sentimentality, but fortunately the actual events depicted in the documentary are intelligently and briskly organised to help undercut the sappiness a bit.

Making its way in limited release across select cities, The Whale will gain some traction because of the participation of Reynolds, who’s also one of the documentary’s executive producers. But with its low-budget production values, the film should fit quite comfortably in ancillary markets and classrooms soon enough.

Based on a previous documentary from directors Suzanne Chisholm and Michael Parfit called Saving Luna, The Whale spotlights the approximately five-year ordeal of Luna, a baby orca who in the early 2000s wound up alone in Nootka Sound near Vancouver Island. Chisholm and Parfit balance interviews with locals with footage of Luna as he tries to make friends with humans, which may ultimately prove dangerous for both himself and his new companions.

With Reynolds providing warm, conversational and personal first-person narration – we learn that he grew up around the same area as where Luna was found – The Whale tips its hand early to being a cuddly, big-hearted documentary in which the baby orca is meant to be seen as a harmless, lovable creature that can teach us all lessons about friendship and community.

But while that cutesy tone can get tiresome, the film gets stronger as it focuses on the intriguing dilemma of what’s the right thing to do with a homeless orca. Showing fairness to both sides, The Whale illustrates why some in the scientific community feared that a too-close bond between humans and the charming whale could accidentally lead to his demise. Consequently, the documentary’s drama derives from the participants’ conflicting views over what should be done, with some wanting to give the animal attention and affection, while others preach tough love to encourage Luna not to become too cosy with humans.

As Luna gets older and local authorities remain divided on a course of action, The Whale utilises extensive footage to humanise Luna so that he does indeed seem to be as soulful as the film’s talking heads suggest. Although The Whale could never be called particularly riveting filmmaking, it does succeed in showing how Luna’s ordeal was very much a battle of duelling good intentions, which makes the final outcome all the more poignant. Even then, alas, The Whale oversells its sentimentality, but fortunately the actual events depicted in the documentary are intelligently and briskly organised to help undercut the sappiness a bit.