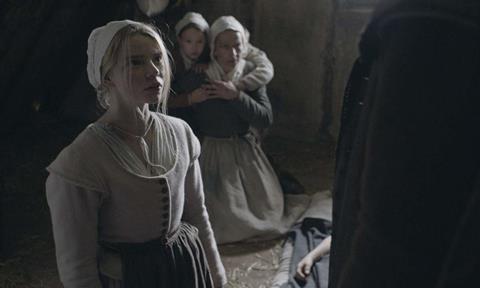 An exercise in beautifully sustained, building anxiety, The Witch makes the most of its bone-dry tale of a 17th century New England family trying to survive alongside an inhospitable forest that most certainly contains something wicked. First-time feature filmmaker Robert Eggers uses this horror setup for some familiar observations about religious hypocrisy and how paranoia can spread like a virus. But the film’s thematic shortcomings ultimately don’t matter too much: When you’re too busy being enraptured by The Witch’s dark elegance, nitpicking doesn’t really enter into the equation.

Calling to mind The White Ribbon in its unsettling tone and sense of rural mystery, The Witch doesn’t leave much doubt that there indeed is a witch in the forest — the question is simply what she might do next and what her agenda is.

Premiering in the US Dramatic Competition, The Witch would have fit in just fine as part of Sundance’s Midnight section, its creepy dread perfectly suited to the sophisticated horror crowd. Boasting no stars and set in 1630s America with characters who speak era-appropriate English (plenty of “thou”s and “thy”s), the film is no commercial slam-dunk, but strong reviews and good festival buzz will significantly raise its profile.

As the film begins, the prideful William (Ralph Ineson) has decided he will cut ties with his English settlement and move his wife and five children off into the wilderness, believing that the community isn’t living close enough to God’s word. Despite his hope for a more righteous life communing with nature, evil has other ideas. First, the family’s infant son is mysteriously kidnapped in plain sight. Soon after, a sense of foreboding surrounds the family, its source possibly emanating from the dark forest nearby. We get brief glimpses of a malevolent force in those woods — a witch, perhaps — but the family (slowly being picked off one by one) start to suspect that the perpetrator is the oldest daughter Thomasin (Anya Taylor-Joy), who was there when the infant was taken.

Calling to mind The White Ribbon in its unsettling tone and sense of rural mystery, The Witch doesn’t leave much doubt that there indeed is a witch in the forest — the question is simply what she might do next and what her agenda is. Unfortunately, this premise can create storytelling limitations: We know that the family’s growing belief that Thomasin may be in league with the devil is unfounded, and so we have to watch them pointlessly bicker, waiting for the next unseen terror to strike.

But Eggers and cinematographer Jarin Blaschke make up for that narrative drag with a series of superb suspense sequences. The Witch’s greatest asset is its precisely controlled menace, and so even when nothing terrifying is happening, it feels like something ominous could be unleashed at any moment. (This is partly to do with the endless grey skies framing the family, as well as Mark Korven’s off-kilter score, which incorporates choirs, strings and hurdy-gurdy to evoke an unsettling, disorienting atmosphere.)

Eggers’ screenplay isn’t as crafty in establishing his characters. Though Ineson lends William an almost Old Testament gravitas — his deep voice suggests a fire-and-brimstone severity — this patriarch doesn’t possess much dimension. In essence, William is a man so devoted to God and to his own (misplaced) sense of justness that he’s blind to the hardships to which he’s subjecting his family. (Their crops won’t grow, and their money is quickly dwindling, and yet he insists that God will reward their faith.) He’s no doubt due for a comeuppance, but there isn’t enough nuance in the character to make his fall dramatically compelling or satisfying.

In truth, The Witch’s central figure is Thomasin, the dutiful daughter who finds herself the unwitting target of the family’s growing distrust. Tormented by a mother (Kate Dickie) more concerned about her younger children — not to mention coping with a brother (Harvey Scrimshaw) who can’t help but notice her blossoming sexuality in the form of recently developed breasts — Thomasin feels increasingly ostracized by her family. This is all the more disconcerting considering that, since they’ve left the settlement behind, she’s on her own, trapped between her brood and the unknown terrors of the nearby forest.

Newcomer Taylor-Joy superbly articulates Thomasin’s mounting anxiety, while at the same time hinting at this teen’s burgeoning independence and defiance. To be sure, The Witch focuses on its creepy scares more than its characters, but Taylor-Joy grounds the horror in real feeling, allowing us to recognise that her worries aren’t just about this unseen witch but also her suspicious family.

As wonderfully understated as much of the fright in The Witch is — rabbits and livestock may freak you out after watching this movie — Eggers sometimes resorts to Exorcist-like scares, although to the filmmaker’s credit the intensity and believability of the performances elevate the occasionally familiar horror devices. But then comes a third act in which Eggers and his team absolutely overwhelm the viewer with twists that are incredibly bold and upsetting, relying not on gore but, rather, primal images of evil that have lost none of their resonance four centuries later. Even when The Witch lags at times, it hooks us with a fundamental truth we know but William’s family never fully grasps: No amount of good intentions can stop what’s coming for you.