The Woman In Black: Angel Of Death 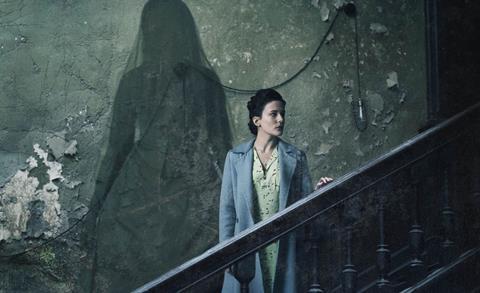 A suitably spooky sequel to 2012’s surprise hit The Woman In Black (which grossed more than $127million internationally), this World War II-set follow-up heads into familiar ghostly territory, favouring old-fashioned misty spookiness and ‘behind you’ jolts rather than lashings of blood’n’gore. Its strong points are the sense atmosphere and the appropriately misty backdrop, though it lacks the star quality that Daniel Radcliffe brought to the original, with the characters thinly drawn as the film favours mood over well-rounded personalities.

At heart the film replicates the original story, with the spooky ‘woman in black’ the catalyst for a series of deaths and hauntings.

There is a built-in awareness of the brand given the success of the original film which itself was based on Susan Hill’s best-selling novella and record-breaking play, while it also benefited from production company Hammer Films long association with classic horror films.

The first film was set in the late 19th century, with Radcliffe playing a young lawyer who has a series of horrifying experiences at haunted Eel Marsh House, while the sequel shifts forward some 40 years to the early years of World War II.  During the Blitz of 1941, schoolteacher Eve Parkins (Phoebe Fox) is sent with a class of evacuees to the now derelict Eel Marsh House, out in East Anglia where it is isolated from the nearby village by a causeway across the Marshland.

Along with staid and tough headmistress Jean Hogg (Helen McCrory), she tries to keep up a brave front for the frightened children, but a series of disturbing events linked to young child Edward (Oaklee Pendergast) – who hasn’t spoken since he saw his mother killed in the Blitz – sees her delve into the history of the house and dark revelations about the former owners.

With the help of hunky RAF pilot Harry (Jeremy Irvine) – who has wartime issues himself – she learns more about the dark secrets of the house and the vengeful spirit that has set its sights on the children.

Phoebe Fox (one of Screen International’s Stars of Tomorrow from 2011) is perfect as the gently determined heroine whose own personal traumas have an impact on her attitude towards the children and the house itself. She has an innate warmth and intelligence that helps her Eve convince as a young woman who rails against the horrors around as she seeks to protect young Edward.

Jeremy Irvine’s stoical RAF pilot is more of a caricature and would have benefited from being better developed, though a sequence late in the film that takes place at the strange RAF base filled with dummy decoy planes which he runs is a nice twist on the typical wartime imagery. The excellent Helen McCrory is rather wasted as the clichéd tough headmistress, which is a shame given her strong personality.

At heart the film replicates the original story, with the spooky ‘woman in black’ the catalyst for a series of deaths and hauntings, and while she is a reassuringly creepy presence and the misty atmosphere impressively sustained the film is rarely truly scary despite a smattering of chilling moments. It is elegantly shot by cinematographer George Steel while Jacqueline Abrahams’ production design helps sustain the mood.

Screenplay: Jon Croker, based on a story by Susan Hill